What Agincourt tells us about the conservative mind 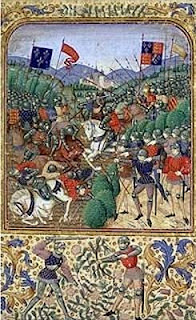 We have managed to live through the sixth centenary of the Battle of Agincourt without too much embarrassment.  It is strange that we should still celebrate a battle which, although it was an English victory, caused so much death and misery.

But perhaps the French should just grin and bear it, just as we have been doing about Bannockburn - a battle fought in similar circumstances - now for seven centuries.

For me, Agincourt remains interesting primarily because of what nearly happened, rather than for what did. As I wrote in the Guardian last weekend, we came closer to merger with France then than any time except 1940. More on the creation of Frengland another day.

What Agincourt ought to be now is a symbol of the folly of military pride, and in particular the disastrous psychology of the frontal assault - which has served this country so badly over the past century and a half, just as it served the French so badly in 1415 and the English so badly in 1314.

It particularly afflicts empires and former empires. It goes with the conservative mindset of deference to power. I have just been reading Lady Diana Cooper's war memoir Trumpets from the Steep, and she encounters a number of boneheaded military types talking about how we need to "teach the Japanese a lesson". The result: the fall of Singapore.

Big organisations, 'big' nations, former empires fling up this kind of psychology. It rejects cleverness, refuses to accept intelligence, and sends their underlings into battle without a plan. It is the American invasion of Iraq - I'm sure the French aristocracy before Agincourt talked in terms of 'shock and awe' to teach the English a lesson.

So, yes, this isn't really a blog post about Agincourt. It is a post about conservative psychology versus Liberal psychology.

It is shock and awe stupidity versus the vital importance of challenging mindsets from below, in the sense that Karl Popper meant it in The Open Society and its Enemies. If you open that possibility, you can learn. You can be clever, you can move forward.

So save us all from being led by conservatives. Let's hope it never happens...

Subscribe to this blog on email; send me a message with the word blogsubscribe to dcboyle@gmail.com. When you want to stop, you can email me the word unsubscribe
Posted by David Boyle at 08:52

Azincourt, we are not big on that for obvious reasons. Hundred Years' War looks so much fun. Aggressive nationalism is best channelled in sports .

I really don’t think the deference to power is a necessary conservative thing. Blair has apologised for the bad intel on the CV that got him the Middle-East Peace envoy job.
When one individual, a small group, their relatives and cronies hold all the cards, and use fear and violence, deference to power makes perfect sense for your survival. The photographs of citizens killed in Stalin's purges at the Memorial Society in Moscow haunt you for a long time. Deference to power and the love of war may be ingrained as the result of what Alice Miller called poisonous pedagogy. Universal suffrage is a relative new thing, even more so for women.

The Group /Family/ Tribe / Organisation only reject cleverness and intelligence when it threatens their hold of power and resources. Getting young men to die on battle fields for your selfish reasons is better than to see them at your gates with pitchforks demanding change, fairness and equality. Because if power is shared, so will the goods. And how will you feel special if you can’t feel superior to another human being?

Check out David Olusoga’s The World’s War, for a more recent “ disastrous psychology of the frontal assault”.

Talking about Empires, like the English vs the French, have you read John McHugo gem of a book on Syria?

I am a woman by the way, deference to power was a given in my education for survival ( to father/husband/sons or the head of the matriarchal clan) as well as the need to smile more and not to scare men off. But you know, thing are changing. Somehow Hillary Clinton ( like her or not) showing what an tough old-broad can do at a McCarthiesque hearing is more interesting than getting contouring lessons from a pimped out Kardashian.

The French now days got their own problems, in the country where the need to conform is crying out to be addressed, a scary percentage are harping back to a dreamed-up time - Pre-May 68, where things were "peachy" – if you knew your place, were white, Catholic, and you could lecture your colonies with impunity while exploiting them.

I think you're probably right. What I meant by deference to power in this case - is the sort of rage that I sense in conservatives that people are not knuckling down and doing what they're told, and understanding who has the power in every given situation and accepting it as the way of the world. Deference may not quite be the right word...

I see it more the rage to be a response to desperation. Debt is 83% of GDP, the deficit hasn’t been cut as expected, they can’t scare off foreign money. The possibility of an EU exit is a real big business nightmare.

The Conservatives are heavy with certain Corporate ( As New Labour before them ) entities, selling Corporate-Bid-Brochure dream to ordinary people who everyday face an opposite and cruel reality.

They have no credible opposition - Citizen Smith is very sweet, the Liberals are and will remain in Coventry for a while. There is so much dissonance people can take. Check out the Twitter feed for N.10, the response to #ownyourownhome, sweet Lord, it is hilarious.
Power is great because it gets thing done, use it unwisely and hubris gets you in the end, no matter what your beliefs are.