The last of the bearded sandals 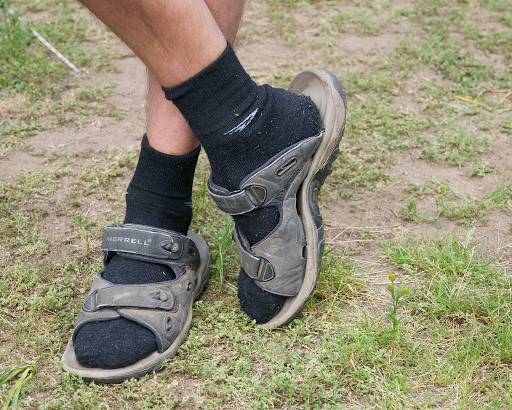 This post first appeared on the Radix blog.
When I first joined the Liberal Party (1979), and particularly when I started going to their assemblies (1982), the television cameras used to linger on those of us sporting beards or sandals.

There was one large fellow in both who used to sit at the front. I never discovered who he was.

It is hard to be precise about what sandals and beards used to mean in politics. I wrote about this in the Guardian after the first modern sandals went on display – and the peculiar way that genuine radicals seemed to flow towards this particular garb.

I mentioned that I occasionally wear socks as well and have never really been allowed to forget it.

Politically, beards and sandals became a symbol of the deep divide on the left, between Labour and Liberals, socialist and radical. For some reason, the look was never really foisted on the Greens – they tend to be portrayed more as kind of manic druids (“Go back to your constituencies and prepare for government,” said a Green cartoon in Private Eye after their spectacular Euro-election result in 1989, showing them gathered around Stonehenge, blowing trumpets).

No, beards and sandals were a Liberal radical uniform. Yet their Lib Dem successors seem to have dodged them in favour of suits and dangly ear-rings. After the very sad death of Tony Greaves last week, I’m hard pressed to think of a single be-sandalled Lib Dem.

Greaves was an inspiration when I joined the party, from his position running the sandalled Association of Liberal Councillors in bearded Hebden Bridge. Or with his weekly column in Liberal News. By the time I became editor in 1992, it was Lib Dem News and he was only writing the back page column once a month – but he could still pinpoint a confusing issue and show, clearly and inspiringly, the Liberal angle.

He wrote a piece in 1997 for the Liberal History Group on ‘Why I am a Lib Dem’, rather like Keynes’ essay ‘Why I am a Liberal’. The upshot was that, actually, he wasn’t – he didn’t know what it meant – but that he was a Liberal. It is a view I have come round to myself as, in practice, the liberal and social democrat ideologies seem to me to be getting further apart.

Greaves was also the personified engine room of community politics, urging Liberals to think like newspaper editors to get elected. Not too much though – “would you vote for your local paper editor?” he said.

Community politics has not really survived. Politicians of all parties badly need to understand the newer concept of ‘co-production’ (my colleagues Edgar Cahn and Chris Gray have published a pamphlet on co-production and social isolation) – but more on that another day.

Tony embodied the beards and sandals approach – what academics describe as the ‘distributist wing’ of the Lib Dems.

This is an obscure way of explaining a now sadly obscure wing of the party. I also realise that, as one of the few people in the UK to write about this largely forgotten element of Liberal theology, I may now be the only expert left. But by coincidence, I just wrote about these issues in the blog of the Social Liberal Forum – and I came to a similar conclusion there:

There are now political academics who use the term ‘distributist’, shorn of its Catholic accretions, as a shorthand for the bearded sandals wing of the party. As one of that persuasion myself, I feel myself increasingly alone and misunderstood by either technocratic wing – neither right nor left seem to understand why I might be against big business but in favour of small, why I might be in favour of entrepreneurs but against corporates.

'No algorithms' and the tickbox robots

I had my covid jab on Friday and it turned out to be the Pfizer version.  Which meant, apparently, that that we all had to sit in the surgery for 15 minutes in case we collapsed immediately afterwards.

I had no idea that this had happened to anybody. So let me take this opportunity to repeat that I don’t think it helps the pro-vaxx cause to treat anyone who discusses side-effects like some kind of Trump supporter.

There is no doubt that, for a few individuals, vaccinations can be a bit of a lottery. But I had already decided that I should take a risk, if necessary – on the grounds that I, at least, need to show a little courage if we are ever going to get our world back again.

As they say, every little helps…

But I learned from the experience, thanks to the older man who managed the car park, the ancient doctor who looked like a retired car mechanic who administered the jab, and the huge numbers of smiling local volunteers who accompanied me through the whole process.

This seems to me to be the key; local volunteers can make things happen effectively and efficiently. compare that to the algorithm-laden robots in the government-procured private sector test and trace.

That is the most important lesson for me from the last few weeks.

I mention algorithms advisedly because, last week we had what I believe is the most important official admission so far of their potential for inhuman mischief, by the education secretary Gavin Williamson.

In fact he promised this year's teacher-assessed GCSE and A level exams would involve “no algorithms whatsoever”.

I take this is the first recognition that I was correct last year in my book Tickbox about where automated systems might belong, and where they definitely don’t.

The decision must have balanced the number of appeals against a flawed algorithm against how many against a marginally less flawed human teachers. In fact, this is a big opportunity for teachers it seems to me – to demonstrate the superiority of human decision-making about other uncategorisable humans.