Towards a different kind of leader

This blog post first appeared on the Radix blog...

There is no doubt that – rightly or wrongly – we are feeling let down by our leaders these days, whether it is for their vacillation or greed or, listening to Keir Starmer, maybe for their steadfast failure to talk about what’s most important.

Personally, I think the emails between Boris Johnson and James Dyson are neither here nor there. And the NHS blogger Roy Lilley feels the same way: see his latest blog post about accessible leadership to see why.

Neither, actually, is what was or wasn’t said in the heat of the moment in No. 10 – especially as we have not in fact had bodies “piled in the street”.

Allegations about who paid for Johnson’s refurbishment in Downing Street are much more important. So of course is David Cameron’s insanely close relationship with the banker Greensill.

Then there is the other kind of flawed leadership, displayed by Post Office chief executive Paula Vennells, pursuing 700 sub-postmasters through the courts because their hopeless IT system said they were stealing money, some as far as prison or bankruptcy. Some of them have finally been exonerated after more than two decades.

The system began to go a little haywire a good 12 years before she took up the post, yet she carried on with a kind of cruel intransigence.

Why are our leaders so infected either with greed or tickbox? Why do they regard their job as a combination of deference to those above them and contempt for those below? Is that a peculiarly British combination?

Contrast that for a moment with Sarah’s experience on Sunday, getting her jab at the Brighton Centre, which was packed with humane, calm and generous volunteers giving up their weekend to help out after a hard week at various coalfaces.

She came back from her needle encounter bubbling over with enthusiasm for the volunteers – and asking why David Cameron had been taking his banker friend to see the Saudi crown prince, who appears to have been behind the killing and dismemberment of the journalist Jamal Khashoggi, when ordinary people were giving up their time to help out.

It is good question. It is almost as if our current crop of leaders render themselves useless for ordinary life after office, because power corrodes their humanity in some way.

So there is one element of radical centrist leadership. Somehow we have to roll back the myopic reliance by our leaders on single tickboxed indicators – whether that is money or what their the internal IT systems are telling them (my Tickbox book also explains how those who run the world, divorced from the frontline, are often the only ones who believe what their tickbox systems are telling them).

But there is a problem or the left here too, because the left also doesn’t believe that ordinary people can manage things brilliantly and humanely – and do so every day.

The predominant narrative on the left suggests that ordinary people are the source of sexism and racism – and must therefore be controlled by professionals and other tickbox systems – to make sure that only approved buzzwords are used.

That leaves the radical centre as the only section of politics where we can talk about the heroic ordinary, bringing up children every day, with great skill – before they get spied on at work or gaoled because the IT system of their employers claims they have got their fingers in the till.
http://bit.ly/RemainsoftheWay ... 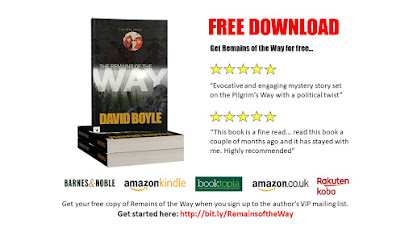