Jubilee report: what a peculiar nation we live in! 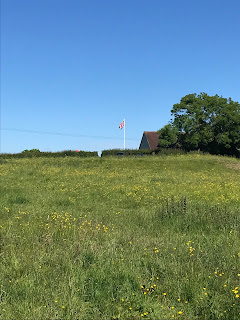 This post first appeared in the Radix UK blog,,,

I spent the afternoon of the first jubilee bank holiday on 2 June looking around Virginia Woolf’s old home and garden in the village of Rodmell in Sussex.

It was a beautiful place and a flawlessly lovely day.

After locking ourselves for a little while in the world of Bloomsbury and Keynes, it became clear that from the other side of a hedge towards the down and the sea, marked by a prominent union flag, wafted the unmistakable aroma of sausages cooking.

A few minutes later, we had gone beyond the hedge ourselves to find a number of people apparently dressed in union flags, outside a cricket pavilion. plus musak from a big band, and one older lady who had been at the 1953 coronation.

It was all horribly, deliciously English – the kind of event that Virginia Woolf herself would have written about without really approving of – and we ate our sausages and onions along with the other early-arrivers at the Rodmell village fete.

I enjoy jubilees, I have to say – but I don’t feel entirely comfortable with the old London-centric heritage idea – that somehow national celebrations are just a matter of mixing some beefeaters, some London buses and a flypast by the Battle of Britain flight.

I have no problem with flummery either – on the one condition that we celebrate effective institutions, simply hanging onto the ritual while hollowing out their meaning and purpose is just pointless and horrific.

Some years ago I wrote a book about the English (How to be English) which lists some of the other peculiar elements that make up the sense of being English – from marmite to the last night of the Proms.

I’m aware of course that this won’t include the other nations of GB, but since I believe that our future requires us to be more ambiguously separate, I’ve stuck to pontificating about just the one of them.

But in the case of England, what I found was that many of our most distinctive ‘memes’ actually started elsewhere – from fish & chip (Jewish) and Morris dancing (moorish) to Henry V (Welsh).

I find amazing, and rather wonderful, is that you can actually construct Englishness from these. It may be that the particular at any time is all the English share – and we simply add to our number by a kind of osmosis. After all, it wasn’t that Englishness was created by the climate or weather, which changes from year to year.

If so, then I believe we need to think a little harder than union flags and beefeaters, though I suspect sausages and fried onions might always have something to do with it.

http://bit.ly/HowToBecomeAFreeanceWriter
Posted by David Boyle at 13:15 No comments:

Public Services: too tickboxed, too inhuman, too complex

In the heyday of Gordon Brown’s chancellorship, I went to a conference about the future of ‘extended schools’. The first speaker was an amazing headteacher, Debbie Morrison, then the head of Mitchell High School in Stoke on Trent, who provided me with the first story in my book The Human Element.

She told the dramatic story about how the school had been turned around, and also her first day in post. There had been a commotion outside her office and her secretary warned her to remain where she was. An angry mother had recently hit another member of staff around the head with a pair of muddy shorts.

Three years on, that same parent was the head of the school’s anti-social behaviour unit. Her friends had also taken responsible roles around the school. And they were paid – unusual this one – in chocolate coins.

It struck me at the time that this was not just a prime example of co-production in action; it was also the logical extension of localism. You can’t have government guidelines about how to pay people in chocolate coins; it is depends entirely on the relationships involved, and on the people.

Debbie Morrison is one of those people who is a genius when it comes to making relationships with people and making things happen. You can’t boil that down into a set of deliverables.

After she sat down at this conference, the next speaker was the civil servant charged with rolling out extended schools across one of the regions. It was clear within a minute or so that he would fail, and for precisely the same reason that Debbie Morrison succeeded. He thought in terms of systems, KPIs, targets and guidelines.

He missed the one crucial ingredient that made the difference between success and failure: the crucial, missing human element.

He was also revealing the besetting sin of officials; the habit of boiling down successful examples to universal principles that they believe can be applied anywhere.

It’s a paradox – one which eluded me when I was writing my book Tickbox about the way that algorithms and targets have undermined our ability to act on the world. We have complicated our approach to public services by using tickbox methods, in the hope that they can deliver complex services to people.

Since the Blair/Brown era, we have been trying to measure every aspect of delivery in the hope that we can effect what seems an increasingly complex reality on the ground.

But we fail – because tickbox simply can’t impact on the complexity of people and places.

On the other hand, if we could go back to a simpler way of delivering services, by training professionals to break with the idea that everything they achieve can be measured – the ‘McKinsey Fallacy’ – and encouraging their ability to use their human intuition – then, and only then, can we apply those ideas.

Our need to categorise everything is driven partly by it, but that is a kind of fake simplicity. That is why we have a multiplicity of different kinds of specialists, who feed those narrow demarcations and definitions – as people tend to do.

That is also one of the reasons why services have become so expensive to deliver – because it costs so much to deliver health, education and social services separately.

When they launched the localised NHS in Greater Manchester during the coalition, it became clear quite quickly that they needed to bring together the services aimed at back pain and mental health – especially for those who were off sick from work for either reason. Now, in Manchester, you will be seen by both specialists at once in a joint clinic.

This seems to add to the costs of the service, but only until they can bring those professions together.

Most of us don’t require specialist support most of the time, I’m glad to say. So I think we can dimly perceive the future of services – bringing together schools and health, social and health care and social services, delivered on the same sites, by doctors and educational professionals.

That will release funds for the specialisms and hospitals that people will also need some of the time.

That is the way back to effective services and humane professionals.

Have you wondered why we are now so suspicious of any official in a suit? Because they are probably working for local authorities and have no leeway to treat us like human beings. They are kept people - held fast by their complex systems.