Where have our fields gone? Gone to maize - but not for eating... 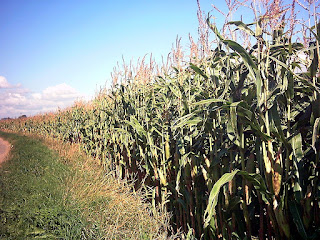 I have been away in Spain and Portugal for nearly a fortnight and I can’t say that the news on the BBC was particularly welcoming as we made our way laboriously back from Plymouth where the ferry docked.

Thanks to lockdown, which has limited holidays abroad, I had forgotten the phenomenon that – whenever you go abroad, it doesn’t matter how long for - the headlines seem almost identical when you get home to what they were when you left.

So drought and inflation greeted us, plus the interminable clash between competing truisms and clichés known as the Conservative leadership election.

What for example are we to make of Liz Truss’s promise, made at the Cheltenham racecourse, that she was going to stop the loss of agricultural land to solar farms?

Were it not or the probability that this was a soundbite designed to appeal to the blue rinse brigade – with a hint of climate scepticism – I might have agreed. I set out an alternative before I left, in fact.

But I also have some news for Liz. The problem she hinted at is far bigger than she realises.

Nearly everywhere you look in western Europe now – certainly in Sussex where I live – there are fields after fields growing dwarf maize.

I know that, locally, these corn cobs  will in the fullness of time make their way to the anaerobic digesterat Wappingthorn Farm. But across the UK, how much of our valuable farmland is now dedicated to growing maize to feed an industry that was supposed to be fuelled by waste products?

It is hard to get accurate or up-to-date figures about this. The government’s 2020 survey suggested that 121,000 hectares are now devoted to energy crops – including biodiesel – or a little over 2 per cent of agricultural land (about the same as farmers now use for growing potatoes). About 75,000 hectares of that was maize - which in itself shows an amazing acceleration since 2012.

We won’t know last year’s figures until December this year, but luckily we have one of the few commentators who understand these issues, and George Monbiot gave over his Guardian column to biofuels in June:

A report for the Green Alliance published earlier this year suggests that food used by the UK alone for biofuels could feed 3.5 million people (or a massive 1.9 billion people worldwide.

The government recently increased its targets for biofuels production. But clearly something happened in the last twelve months to turbo-charge the production of maize for anaerobic digesters across Europe. Probably the desperate search for sources to replace Russian gas.

Food prices have to be higher as a result.

Added to which, maize is a sub-tropical crop. It requires a great deal of water and herbicide. It is therefore highly polluting. But for some reason it is exempted from regulations to protect the environment – which must have something to do with its sudden popularity.

In other words, wrote Monbiot when he first took up this topic in 2014, “the crop that does most damage to the soil is specifically exempted from the rules designed to protect the soil. I have asked Defra six times for an explanation, and it has failed on all of these occasions to provide one. My conclusion, which holds until it deigns to provide an answer, is that maize could not be grown in this country if it were subject the rules that apply to other crops.”

So when you ask why food prices are rising, you only have to remember that – thanks to central government targets – a great deal of our land is being taken out of production to provide ‘waste’ for biofuels and the anaerobic digestion industry.

The danger is, when you have a single crop growing so ubiquitously from northern England down to the middle of Spain, that this is when you develop blights – which is what happened before the Irish potato famine 1848.

Farmers are being urged to grow grasses alongside the maize, in order to keep the land fertile, and to prevent some of the herbicide and pesticide run-off. I haven’t seen this being done anywhere. So I can only assume that we could find ourselves without either the maize or the land it is currently wasting.

And what would Liz Truss say then?