If we protest against Hinkley, what will the Chinese do? 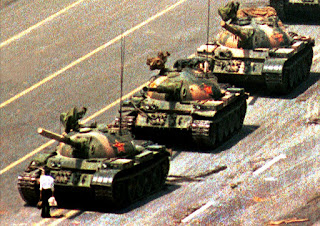 You don't get many moments when you get a shiver down your spine at events you read about, certainly not in the Sunday Times, but the news that George Osborne is to go ahead with the Chinese deal to build a new nuclear power station at Hinkley Point - not to mention another one at Bradwell - really gave me a cold shudder.

It is one of those moments you see the Tiber flowing with much blood, though it perhaps doesn't do to gargle with exactly those words any more.

It isn't so much that we are backing such defunct technology, hugely centralised, vastly expensive, massively subsidised. And bear in mind that, as solar costs fall, nuclear costs are bound to rise - even just the security bills (unless we believe that the world is suddenly getting safer).

Never mind the other risk of technology failure, the risks of ISIS getting hold of some of the fuel is so unthinkable that there really can be no limit to the security costs.

But it isn't that.  Nor is it really the subsidies that scare me, though the idea of our children and their children paying the double the current costs of electricity right up until 2060 - which I understand is when the agreement lasts until - is downright obscene.  This truly is the super-PFI to cap all PFIs.

But no, it isn't that either. What worries me most is the implications of major non-violent opposition to the developments, as parents quite reasonably begin to fear for the health of their children - not to mention fearing for their wealth. Because I believe the nuclear kickstart will also kickstart green protest in a way we haven't seen since the road protests of the mid-1990s.

What does the government do? Treat these demonstrators in a tolerant English way and risk offending our Chinese paymasters? Or will the government be required, by some secret or assumed agreement, to behave in a far more heavy-handed Chinese way towards them.

And in that logical fork, I see a real threat to our way of life. Osborne may admire the Tiananmen Square style capitalism of the Chinese. I don't, and neither I believe do most the nation.

Perhaps that doesn't matter when that style of government stays in Tiananmen Square. But what happens when we import the Chinese billions to build our white elephants over here?

The Chinese do know a bit about “ National Humiliation “, Opium anyone?

Hinkley Point seems like a ugly suitor-less daughter that is given to a the rich foreign saviour with the cash to do the electrics in the crumbling manor and maybe the more.
You know, like Downton Abbey without the rose-tinted glasses.

1. PFI is always dreadful; one this long is obscene. Does anyone know what the interest rate is? Is it denominated in pounds or Yuan?
2. The proposed reactor type is not failsafe. Why do we even consider it?
3. Hinckley Point is right next to the sea. We DO get tsunamis in Britain, just less often than in Japan. So this IS Russian roulette but with unknown odds.
4. Long term electricity costs will fall from current levels (that's the long term trend). So, how long before we are paying 4x the going world price for electricity? How will our industry compete then?
5. What is Osborne's plan to earn the foreign exchange to pay the Chinese back? Neoliberal thinking hasn't yet created an economic powerhouse. Why would anyone suppose that would change anytime soon?
6. Who knew Osborne was minister for energy?

Unfortunately there seems to be no sign of public opposition to Hickley Point or to the Chinese involvement in this hideous monster of nuclear power pushing the beautiful bird of renewable energy out of the nest. Hinckley Point is far away for most people and even many concerned about climate change (particularly some so-called greens)seem to think the terrrible dangers of nuclear power are trumped by dangers of floods and losing islands and so on. I think I'd rather drown than be killed by radiation, but I suppose that's only a personal opinion. Renewable energy plus a huge reduction in all energy use- which is easily possible - would enable us to avoid both drowning and/or frying. David Boyle correctly lays out the dangers of nuclear power , but I fear be overestimates the wisdom and/or the energy of the majority in this country. It won't be fun telling the people "I told you so."