Euro-referendum: the uneatable and unspeakable 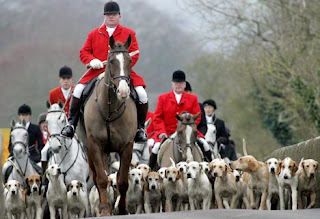 I described a kind of nightmare scenario yesterday where the UK leaves Europe and sells off its social
security system, rather as England did in the 1530s.  It is a strange repeat of history, this time as farce, starring George Osborne as Thomas Cromwell and, I suppose, David Cameron and Boris Johnson as Henry VIII (it takes two of them).

But the truth is that the coming European struggle is not nearly as clear-cut as it ought to be - and I fear I am going to upset my regular Lib Dem readers (if there are any) by my quiet note of scepticism.

The problem is that neither side of the formal European referendum debate, as currently set out, are at all attractive. Perhaps that was also the fundamental difficulty with the Scottish referendum - both sides seemed so awkward that you had to hold your nose to decide.

In the blue corner for the Great Euro Debate, there are the xenophobes and vainglorious nationalists. But in the red corner, gathering rather quickly now, are the usual suspects on the other side - the technocrats and the monopolists, the supermarkets, the big banks - those who believe that the world should be made safe for Barclays Capital.

It's a bit like Oscar Wilde's description of fox-hunting - the pursuit of the uneatable by the unspeakable. Perhaps also like Benjamin Barber's choice of Jihad versus McWorld - I don't want either. They may not be equal in their poison, it is true, but when you have xenophobes versus technocrats, I don't know which way to turn.

Simon Jenkins in the Guardian last week went a little far when he said we should shake up Europe by voting to leave. I have some sympathy with that position - unlike some pro-Europeans, I don't confuse the ideal of European institutions with their technocratic reality (tyrannical reality if you are in Greece).

But what I really want, above all else, is the option to vote for the Europe I dream of - based on the original idea of subsidiarity, and deriving from Catholic social doctrine, developed for Pope Leo XIII by Cardinal Manning in London, and derived from the English agrarian tradition as represented by John Ruskin.

That's what I want - a Europe that uses its muscle like a medieval monarch was supposed to do but very rarely did, to defend the small-scale against the rich, defend the human detail, the ordinary against those who would keep us passive and easier to process.

The sad fact is that David Cameron is seeking to sweep Europe further into the technocratic mould.  And I am supposed to vote to stay in as a result...

I know this isn't exactly the party line, but can you at least acknowledge that I have a dilemma? And can you imagine how a Liberal force might articulate a different vision?

As a long term EU resident here, I am a baffled with the UK exit request but I understand it.

Leaving the EU might save you from the EU but not from globalisation, even if you want to become like Switzerland or Norway.

Like Toby Ziegler said once “ Free trade stops wars!” and as members of my family died in useless wars, I kind of agree.

I agree about free trade - as long as it is genuine free trade, not the rule of the jungle which only the wealthiest are free to monopolise!

I understand, this is why small business is the most divided about the EU issue.

But maybe it is better to be inside the tent negotiating better deals, than out hustling for new business. The new World order is not that predictable.