The people who made Alan Turing possible 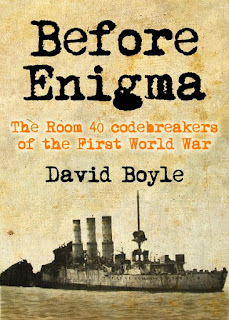 I have launched a small crowdfunding campaign to write a book. I've never done anything like this before, so before I explain Before Enigma. perhaps the first thing I should do is to explain why I want to write it.

Three reasons, and you can see me explaining it in my very first crowdfunding video here. But I can go into a little more detail here:

#1. To put Turing in context. I first got interested in Alan Turing when I was writing about authenticity, because the Turing Test - a way of verifying whether computers are human or not - is relevant to my interpretation of what people mean by 'real' these days. Then I wrote a short biography of him, which has sold very well, and followed it up with Operation Primrose, which tried to put Bletchley Park's role in the struggle to beat Enigma into some kind of context. One of these was the forgotten business of the German codebreakers - who managed to read all the British naval signals from 1935 to 1943.

But even then, there was a wider context that needed to be explained. The people who recruited Turing and tried to manage him, and organised the systems which allowed him to be successful, have been lost from the story. And those people - Knox, Denniston, Birch - learned their trade, naval codebreaking, during the First World War. So I wanted to write about Room 40 at the Admiralty, what it was like, and how they were moulded into shape by a man who was, in his way, almost as much of a genius as Turing: Captain Reginald 'Blinker' Hall.

#2. To put the navy back into the picture. In my youth, hardly a week went by without a picture of a British warship on the front page of the newspapers. Not so these days - we seem now to regard ourselves as an army nation, with all the regimentation that implies. And in the coverage of the First World War centenaries, hardly any mention at all of the naval war - not the Falkland Isles, or Dogger Bank or the submarine passage of the Dardanelles. It needs remembering. Beyond Enigma tells the story, from a cryptography point of view.

#3.  To look at how effective organisations develop. I've become fascinated about how organisations have become so dysfunctional in our own time (see my book The Human Element). The First World War was arguably the moment the problem of spreading information up and down a hierarchical mega-organisation first emerged.  The unexpected bonus of being able to read the enemy's decrypted naval signals caused a small crisis in the First World War - they were used disastrously, and particularly disastrously in the Battle of Jutland in 1916. But the lessons were learned so that, by 1939, the system had developed - again thanks partly to Knox, Denniston and Birch (and certainly Hall) - so that it worked.

Unfortunately, we have forgotten the organisational lessons since.  Not so much in cryptography, but in the public services and other mega-organisations we depend on every day.

Before Enigma is a book - a short ebook - that aches to be written. If nothing else, it will put The Imitation Game into some kind of context. So if you could see your way to contributing in some way - either financially or by forwarding this message to anyone who might be interested - I would be enormously grateful...and it would make possible rather a good book, though I say it myself...

You can read all about it here.