The next struggle over solar power - and who will win it 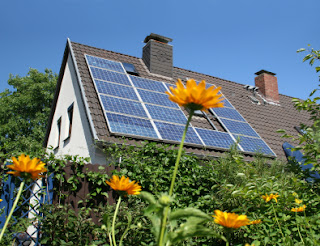 I find myself on the opposite side to the science writer Matt Ridley most of the time, because he takes his very sensible theses too far - in a rather too deterministic way. He gives a sense that whatever happens had to happen. Which is nonsense.

But I found myself warming to him on the BBC radio programme Start the Week yesterday morning, talking about his book The Evolution of Everything, for his emphasis on the clear historical drift towards complexity - where the power of change goes in a direction towards what bubbles up from below.

Put like that, there seems to me to be a broad drift towards independence and self-determination that you can see back for the past two centuries or more. There are hiccups, blind alleys and blips, of course. And turnings, like the one taken by Margaret Thatcher, which seemed to be about independence but was actually a new kind of tyranny.

It is a way of understanding the world. With me so far? Now what, then, are we to make of the emerging struggle over solar energy in the USA?

Because there is a battle under way there which goes to the heart of the future of energy, and barely a hint of it has yet reached the UK - though battle has already been joined in sunnier places like Spain.

It is one of those areas where the UK is sadly backward in its political discourse. But it is important who wins. It is the attempt by energy utilities to charge people extra for their solar panels.

It is also fascinating that the battle lines in this particular battle pits Greens and Liberals on one side and Conservatives and the Old Left on the other - with the Tea Party, perhaps the American equivalent of UKIP, bitterly split on the issue. Because it is, at heart, about independence and self-determination.

It is reaching a crescendo in the US because the California Public Utilities Commission is proposing, not just to halve the feed-in tariff to half what people generating electricity are paying - that much seems to be happening here - but to charge people with solar panels to connect to the grid so that they make no savings.

Perhaps it is the Tea Party who are most traumatised by the debate, divided as they are between those who follow the Koch brothers in supporting Big Oil in all its manifestations and those who value some measure of energy independence.

Why is the Old Left in favour? Because they regard people who can pay the upfront costs of solar panels as free-riding on the grid, which most people need to stay connected to because they are not generating enough in the evenings. It means that the costs of the grid are falling increasingly on the poor.

It is another way in which energy utilities, like banks, are becoming public services, and haven't adjusted to the role.

In places like Arizona, where similar regulations have been passed, the number of people installing solar panels have dropped to a handful.  The real argument - which you might hope will eventually be employed in the UK - is that solar panels increase capacity, bit by bit, and reduce the need for new power stations. And that helps everyone.

Except perhaps the energy utilities, which need to transform themselves into genuine public services in the face of this disruptive technology.

These arguments have not really erupted in the UK yet and, when they do, despite the sound and fury of the struggling corporate leviathans, it is pretty clear how the story will eventually end. The disruptive technologies will win - whether they are Uber, the Bristol pound, Airbnb or solar technology. They put power in people's hands. They provide a small measure of independence - and that seems to be the way the world is going.

The old structures will fight back, of course. They will complain and lobby. But, in the end, they will lose. And when you develop a technology that genuinely promotes independence, as solar energy does, it will remake the institutions around it.

Shamba Technologies have high hopes for the future and would like to be at the forefront of Africa’s renewable energy sector in the next 10 years. Solar Panel Costs