Clawing Liberalism back from neoliberalism 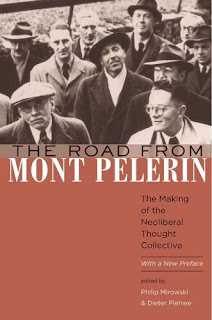 It will no doubt come as an unpleasant surprise to my former New Economics Foundation colleagues, perhaps even a shock, but - as far as I can make out - green economics emerged, rather as neoliberal economics did, out of a resistance to conventional Keynesianism.

The early pioneers of sustainable economics, Ralph Borsodi in the USA or Fritz Schumacher in the UK, were in flight from Keynes. Borsodi even wrote a book about what he called the 'coming Keynesian catastrophe'. This resistance was, in some ways, the spark that lit the counter-culture, the resistance to the idea of state planning and conventional 'progress', which led to everything else - the voluntary sector, the hippies, the Liberal revival, Jane Jacobs, the green movement, the New Age and so on and so on.

I have been reading (thank you, Tomas) a fascinating academic study about the liberal resistance to Keynes which began in the 1940s, when Friedrich Hayek wrote his enormously influential book The Road to Serfdom. It is called The Road from Mont Pelerin.

What Hayek and Michel Polanyi, Karl Popper, Ludwig von Mises and their friends set out to do, when they met at a hotel in Mont Pelerin in 1947, was to revive liberal economics, to save the possibility of self-determination from the growing threat of totalitarian state planners - and to beat the Nazis, the democracies had borrowed some of the same assumptions about central planning and state power.

I mention this now because, it seems to me, the Lib Dem leader Tim Farron's rhetoric reveals an ambition to hammer out a new kind of Liberal economics.  If so, he is absolutely right - but we need a bit of history to see what went wrong before.

Hayek's book was praised by Keynes and Orwell. Yet somehow, Hayek's ideals - and his alliance with the doyen of American Liberalism Henry Simons at Chicago University - led, in a few short decades, to something known as neoliberalism. This is now the deadening orthodoxy of the world and, since it involves the captitulation to naked power, it isn't really Liberal at all.

What happened?  Well here, The Road from Mont Pelerin has something fascinating to say.

Simons had teamed up with Hayek to found the Chicago School of Economics, but committed suicide after serious in-fighting in 1946. The funding they had arranged was partly to write a version of The Road to Serfdom for American audience.  But neither of the two economists charged with writing it ever managed to do so.

It was eventually finished by Simons' great pupil Milton Friedman in 1962 and published as Capitalism and Freedom. It was in some ways the founding text of American neoliberalism, but it made two changes which seem barely important, but taken together have had a disastrous effect - and which also distanced neoliberalism from Liberalism.

Error #1. He argued that intellectual property was a kind of property, and must be defended as such, rather than - as it actually is - a temporary suspension of free trade to encourage innovation.  This has resulted in the disastrous concentration of power and resources, by allowing large corporations to dominate the ownership of intellectual creation so long after it was actually necessary for them to do so.

Error #2. He argued that monopoly didn't matter very much, and - if it did happen - it was the fault of the government for over-regulating.

The first error led to the great heresy of neoliberalism, that corporations should be like human beings in legal terms.  It has vested human rights in legal entities that have resources way beyond any human being. At one stroke, human beings had been disempowered.

The second error seems to me to be the critical moment which made neoliberalism deeply illiberal.  It was the rejection of the most fundamental element in Liberal economics, the defence against the over-concentration of market power, the very opposite of Liberal free trade.

It explains why the dead hand of neoliberal orthodoxy has ignored monopoly as a problem as the monopolies grow in power over our lives, as we fall into the tyrannical clutches of the likes of Google or Amazon.

If we are going to rediscover Liberal economics, and it is important that we should, then we are going to have to unravel these three gigantic mistakes. It may be that we also need to dust down our view of Hayek's original objectives.

Nobody (except perhaps Jeremy Corbyn) wants to return to the days of central state planning, but - let's face it - monopoly is, in its own way, a pretty certain road to serfdom too.

I cannot believe no one has commented. I am unworthy, and too busy to do a good job. But listen. No reform will work unless it undoes secularism and puts Christ back in the center of society, and rebuilds the Church to be the teaching force for social morality. I mean the Catholic Church, in England. And you may as well abandon the longing for some kind of pure liberalism, because it was ever a bad idea, ever subject to exactly the same development we see now, liberalism turning into its opposite. Only a society with firm guiding moral principles and an economic policy of broadly distributed ownership (not income) by law can survive, and it will not be called liberalism because it won't be liberalism. It will be Catholic.

You say three mistakes, yet list only two. What's the third.

Apropos #1 have you read any of our namesakes James Boyle's anti-copyright publications?