I had what was, for me at least, a respectable flurry of hits on Tuesday when I agonised in public about whether the Lib Dems were becoming a pressure group.

If they are doing so, it is partly  for a reason which is peculiar to them - Liberals tend to be blind to the problems of money, just as socialists tend to be blind to the problems of centralised power.  It is also partly for a shared reason: the Left has become terrified of economics, because it used to be regarded - in the peculiarly lame jargon of the day - as a 'shield' issue. In other words, it was a topic they could make no vote-winning contribution about.  All they could do was defend themselves.

As the years went by, their economic muscles atrophied. Then they stopped seeing economics issues at all - so it is hardly surprising that the only way of thinking about economics was the mainstream one, imported from the American thinktanks and spread to the world.

All this is about to change, of course.  Not just because Jeremy Corbyn has exhumed an approach to economics that most people had assumed had long been dead and buried (and may still turn out to be).  But also because, every 40 years, there is a major shift in mainstream thinking.  We are due for ours in about four years time.

What holds us back is that the mainstream has not yet tiptoed into the debate about what we do instead - how we make economics work for everyone. What the new world is going to look like.

Two graphs sent to me in the past 36 hours make the point for me.  The first (thanks, Rob) shows what has been happening to global income distribution, as we all descend into semi-slavery:

The second (thanks, Isabella) is about where people on a median income can afford to buy a house, and it is from the Guardian (an amazing interactive map, with 2014 on the right, and the red are no-go areas): 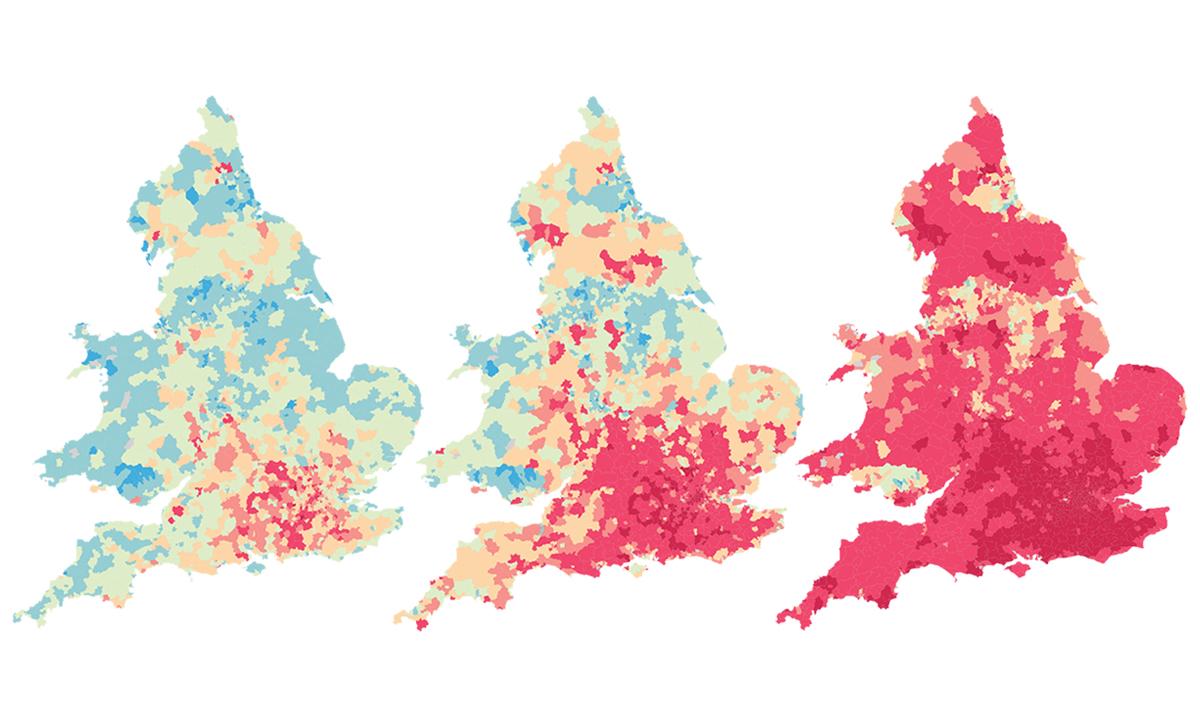 Now, even under Corbyn, Labour seems unlikely to join in this debate about what next - either for fear of the new approved hymnsheet or, more traditionally, for fear of frightening the horses by appearing to be 'anti-business'.

I don't understand where the problem lies. Does criticising the status quo mean being anti-business? Most businesspeople I know are just as critical as I am.

Most are sceptical that welfare or Fabian-style redistribution is the solution, but then so am I...

I can understand why Labour has to feel it must spend energy in public assuring people that they are still committed to the good old business model of the 1950s - but why, with some notable exceptions, do the Lib Dems stay so silent?  And the real question: can they be the political crucible which forges a way forward?

Here's a source for that global income distribution chart: