Big versus small: whose side is Corbyn on? 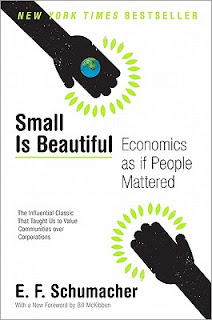 I have no idea whether Jeremy Corbyn will transform the great lump we know as Her Majesty's Official Opposition. I know he deserves to - though I expect the energy he has brought to the campaign is as much as a surprise to him as it is to everyone else.

But of course his arrival on the political frontline is a bit of a headache for the Lib Dems, hence the peculiar series of anonymous briefings which Caron Lindsay got exercised about on Lib Dem Voice. Could the Lib Dems really try to outflank Corbyn on the Left? Well, that really begs the key question here - what does it mean to be Left now?

That is going to be the issue between the two competing parties of the Left, even sharper if Corbyn wins. And don't tell me we can solve the problem by "sticking to the centre ground" either. Where is that, exactly, if the definition of 'left' is in dispute?

What is left unsaid, and perhaps implied in this flurry of nerves, is that - actually - Corbyn is rather attractive to some Lib Dems. Partly of course because he's such an outsider, which always appeals to the Liberal romantic spirit. Partly because what he says is so old-fashioned that it appears radically daring.

But let's not beat around the bush. In two very important ways, Corbyn is not talking Liberalism. Maybe we should spell these out, because they may provide a clue about the way forward.

First, he isn't interested in diversity in the Liberal sense. He is talking diversity in the socialist sense, which is a demarcation of uncrossable boundaries between identities - if you are Scots, you can't also be English. If you are gay, you can't really see the world through the eyes of the opposite sex and vice versa.

This is postmodernism and I don't think it is how Liberals think. There is no space for multiple identities - true diversity - in the world of socialist puritans. No idea that you could be English and Scottish and from Sussex and European and carry dual nationality somewhere else, and understand all of them. That is diversity. It is the very opposite of identity politics.

It is also increasingly urgent, as the economy drives out diversity everywhere. Fewer energy suppliers, fewer seed manufacturers, fewer farmers, and all the time we get more and more dependent on the most powerful of them.

And if you don't agree with me, try having a fight with Google and see who wins...

Which brings me to #2.  If the twentieth century was spent working out the conflict between capital and labour, between public and private, the twenty-first century seems to be gearing up for a titanic clash between big and small - big institutions against small ones.

It is a battle over the meaning of efficiency, about whether economies of scale outweigh diseconomies of scale, or vice versa. It matters - and it matters to me particularly because it puts the Liberal critique of institutions centre stage again.

Now, ask yourself, whose side would Corbyn be on? The point is that he is on the side of big against small.  His rhetoric, and what we know of his policies, imply vast, amorphous and slightly tyrannical institutions, public ones it is true - but really I see very little distinction in practice between the public monsters and the private monsters.

They are all like dinosaurs, self-serving, gently eating their own tails.

Now, here's the crucial bit. Ask yourself, if Corbyn was genuinely interested in diversity - and if he could swap his giantism for something smaller, and therefore more beautiful (and effective), would he still be a socialist? The answer, it seems to me, is that he would be a Liberal. And he isn't.

I know that there will be problems for Lib Dems puzzling out how to deal with a far left Labour Party. It threatens a fearful re-run of the 2015 election, as fearful floating voters hold their noses and vote for the status quo.  But there will be one great benefit: Liberals will have to think a bit more clearly about what Liberalism is.