Time to dump the Labour way of campaigning 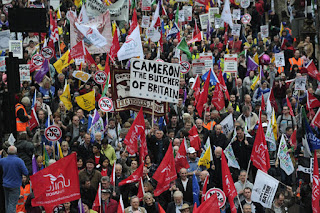 Jeremy Corbyn's election as Labour leader has an end-of-era quality about it, perhaps the first Labour leader with something to say for a good two decades, whether one agrees with him or not.

His first public pronouncements have a strange Miliband-esque quality about them, as if the rhetoric is so much about 'change' that you forget to wonder what kind of change he is talking about, and end up none the wiser.

Most of his reported positions seem pretty retro so far: they remind me of my university days.  On the other hand, he does have a number of important contributions which are genuinely new - more on that another day.

The central political problem for the UK - because this affects everyone - is that Labour is too big to kill off, but too futile to take power. Their main role has been to prevent anyone else taking authority away from the Conservatives, and their main policy role - at least under New Labour - has been to prevent new thinking seeping dangerously into the mainstream.

I think I agreed with every word of Martin Wolf's analysis in the Financial Times:

"Land-use planning and land taxation, housing, the finance of local government, taxation of inheritance and the structure of taxation — all cry out for reforms. So does the operation of essential public services, as Mr Blair realised. I would argue, as well, for stronger policies in support of innovation and a focus on the huge risks to the economy of its dependence on soaring private debt. Yet in practice an opposition arguing for such radical reform appears inconceivable. If it were to be radical in such a way, it would probably be as unelectable as Mr Corbyn’s version. It is depressing to accept that a complacent government and an unelectable opposition are what the country must now expect..."

For many people who regard themselves as basically on the Left, as I do, much of what passes for Leftish dialogue is pretty infuriating.

It is always demanding that each and every dysfunctional institution has to be 'defended', though they are so often ineffective or overpaid or both.

It is always analysing who should be 'offended', as if language provided the real threat to civilisation rather than disastrous economics and greed - and grinding out the rage on Twitter or below the line comments in the Guardian.

It is deeply conservative, forever on the back foot, defending the social democratic compromises of the past, but knitting together no practical visions of the future - and especially not economic ones.

So often bitter, so often cross, so often offended, so cynical, so obsessed with the pointless images of generations gone by - meaningless slogans and chanting demonstrators. Yes, I find it hard to warm to the Labour Party's Left, any more than I can warn to their indefensible Right.

But there is one problem above all that we really need to tackle, because it is liable to get seriously in the way of cross-party co-operation.  We have to change the way Labour campaigns on issues.

Labour takes up issues because it makes them more electable, not to make things happen.  Quite the reverse, the best outcome in a Labour campaign is to lose - and to make people angrier with the government.  They don't take up issues to change the world.

It explains just some of the hopelessness and cynicism about campaigning on the Left. The great campaigners, like Des Wilson, campaigned to win. If the Left is going to recover, they are going to have to realise - for more reasons that one - that Labour may never be in government again. We can't wait around for them any more.

If we're going to campaign, we must campaign to make things happen. If we campaign, it must be the antidote to futility, not a cynical embedding of it.

It means an end to the pointless symbolism of revolution. It means consciously and deliberately shifting to campaigning by doing stuff, by making things happen, by encouraging everyone to realise that - even in the way they spend their money - everyone is more powerful than they think.

I don'tunderstand most of this . Do you mean Unions when you talk about the Left "defending dysfunctional institutions"? The current left may engage in "the pointless symbolism of revolution" and I agree that there is an 'infantile left', But do you mean that Jeremy Corbyn is just part of it? Do you mean because he sings the Red Flagwg? Well,time will tell. Meanwhile I hear you don't think much of your own party , the Lib Dems ,either?

What I meant by the dysfunctional institutions slur is the way the Left urges us constantly to defend things which don't work very well. The BBC works well at some things but is pretty useless at others. Many public services are remarkably ineffective, and in that respect not true to the original Beveridge vision. We don't want to lose the possibility of institutions that should do these things effectively, but why should we put up with second rate ones that don't do the job properly - for fear that the Conservatives will do away with the lot?