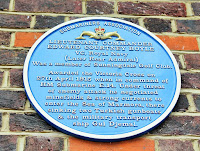 The wartime anniversaries come with increasing frequency these days. It's the Battle of Britain again this weekend. But whatever happened to the navy?

There has been so much broadcasting devoted to the Western Front, and even the Dardanelles, now that the centenary is upon us, but is there a mention of the sea battles of a century ago? The Battle of the Falkland Isles, the Battle of Dogger Bank and the disastrous attempt to force the Dardanelles by sea, have all gone by without a mention.

Does it matter? Well, actually, I think it does. Because we appear to be forgetting that we are primarily a naval, seagoing nation.  When I was growing up, hardly a week went by without a picture of a ship on the front of the newspaper. These days, you just see soldiers.

I wondered about this as I went to the unveiling of a plaque commemorating my cousin Courtney Boyle, who won the VC as commanding officer of the submarine E14, going through the Dardanelles and into the Sea of Marmora in 1915. It went up, thanks to the Submariners Association, on the wall of Sunningdale Golf Club last weekend, which is where he spent most of his last years.

I have submarines on both sides of my family, so it was a moving occasion (I'm also called Courtney myself, so I am a kind of walking memorial).

Two reasons floated into my mind during the commemoration why this matters.

First, we start regarding what comes from over the seas with fear and trepidation, though our forebears were at home there and often came from there themselves.

Second, the Royal Navy has a powerful tradition of informality, a Nelsonian strand of disobeying orders. It is the senior service and it would be a pity to lose this vital, energetic understanding that sometimes, to make things work, you have to do it in your own way.

One of the legacies of the Blair years is that we began to regard ourselves, perhaps for the first time in our history, as primarily an army nation.  Perhaps it isn't a coincidence that this coincided with the iron, regimented straitjacket that have rendered so much of our public services so much less effective.

You can find out more about Courtney Boyle, E14 and the forgotten naval side of the Dardanelles, in my book Unheard, Unseen.

Good points, I believe there is a lot to be aid about how the Nelsonian navy was more meritocratic than the army so did more to foster a sense of patriotism based on the people rather than loyalty to the monarchy. As I think you suggest, the navy is not seen as part of our history because it is now seen as a secondary part of the armed forces. Doesn't that mean the real issue is to define a new role for the navy, which would have to be more based on co-operation than in the peak of the British navy and probably devoted to a more geographical range Europe plus the Middle East. Any thoughts about to define that new role?