See you tonight to talk about Englishness 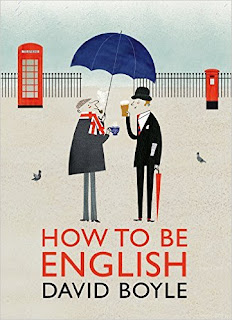 There was such an interesting article in Saturday's Guardian - alright, I admit it, it was written by me - listing five key aspects of English culture which are not English in origin.

But what really struck me were the responses. Within a few hours, there were more than 700 furious comments at the bottom of it from readers, variously accusing me and each other of various aspects of xenophobia or treason.

Of course, below the line in the Guardian is a frightening place, where monsters lurk. If you took all the comments about your articles written there too seriously you would quickly go insane. But it made me realise what a controversial subject this is.

One early comment put it like this, and clearly having known enough about me to guess my political affiliation:

"You can never win with liberals. If you take pride in your own culture, you are derided as being 'insular'. If that culture has enriched itself through aculturalisation, then they tell you it doesnt belong to you. In the next breath, they are lauding other cultures and defending some particular facet or other of it. In short they are reverse bigots and petty minded xenophiles. And then they wonder why their political representatives are rejected..."

That is clearly the first time I have ever been called a 'petty-minded xenophile', obviously from the UKIP satchel of minor insults.

I have been wondering why this should be so controversial. I couldn't have written How to be English unless I loved my own culture, but I suppose I am up against misunderstandings from two sides:

1. The right-wing obsession with purity, as if Englishness was either one thing or another, and as if every tradition must be unsullied by corruption from outside these islands.

2. The left-wing obsession with deconstruction, as if nothing - absolutely nothing - can be taken seriously because it is all an agglomeration.

I'm on the absolutely opposite side. English culture is wonderful because you can see its history in every twist and turn. It is gnarled and deep and confusing, and attracts the flotsam and jetsom from around the world and makes them its own. Nothing about that is critical. Quite the reverse.

One of those who left their comment who did understand this quoted Billy Bragg's song along similar lines, called 'English half English':

My breakfast was half English and so am I, you know
I had a plate of Marmite soldiers, washed down with a cappuccino
And I have a veggie curry about once a week
The next day I fry it up as bubble and squeak
'Cause my appetites, half English and I'm half English too

Well, I'm also half English... But if you would like to talk about these issues some more, especially the lighter side of them, I'm talking tonight on 23 July, at the Steyning Bookshop.... See you there!