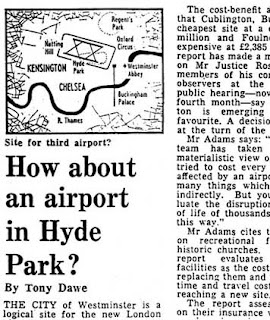 Waking up to the miserable and depressing conclusions of the Davies Commission, that there should be another runway at Heathrow, reminded me of the biggest cost-benefit analysis ever carried out - to somehow calculate where to build the third London airport.

I tell the story in my book The Tyranny of Numbers and it casts a sad shadow over the current debate, with its bogus talk of 70,000 new jobs.

Back in 1969, the government had rejected the preferred site at Stansted and, for the next two and a half years, the commission chaired by the senior judge, Mr Justice Roskill, combed the evidence.

To make sure there was a choice of sites, the Town and Country Planning Association put in their own planning application to build an airport at Foulness, on marshland off the Essex coast much-frequented by Brent Geese. An early version of Boris Airport.

Cost benefit analysis had been used successfully a few years before to defend the idea of extending the Victoria Line to Brixton. But this wasn't so much a calculation – it was a way of giving transport minister Barbara Castle an excuse to say yes, which she duly did.

The Roskill Commission, on the other hand, were determined to work out the answer mathematically. They would do a cost benefit analysis on all the possible sites - the biggest analysis of its kind ever carried out. They would put a value on the noise of aircraft, the disruption of building work, the delay of flights, the extra traffic and they would calculate the answer.

For the Roskill Commission, there was going to be no value judgement at all. The figures would speak for themselves.

To avoid any chance of judgement and to keep the process completely ‘scientific', the measurements were put together in 25 separate calculations. They were only added up right at the end of the process. And to the horror of some of the members of the commission, when the final addition was made, the answer was wrong.

The site they believed was best - Foulness - was going to be £100 million more expensive in cost benefit terms than the small village of Cublington. After 246 witnesses, 3,850 documents, seven technical annexes and 10 million spoken words, some of the planners on the commission felt cheated.

In public, they stayed loyal to Roskill. The commission was excellent, said Britain's most famous planner Colin Buchanan - a member of it – “it just got the small matter of the site wrong".

The team had managed to measure the exact cost of having too much aircraft noise by looking at the effect noise tended to have on house prices. But when it came to measuring the value of a Norman church at Stewkley, which would have to be demolished to make way for the runway, things got more confused. How could you possibly put a money price on that? One joker on the team suggested they find out its fire insurance value. Everyone laughed, but the story got out and reached the press.

Doing it like that would have measured the value of the church at just £51,000.

As it was, the government rejected Cublington for political reasons, and went for Foulness/Maplin/Boris. This in turn fell victim to the energy crisis and the airport was built at Stansted anyway.  As we know.

The planning professor Peter Self - Will Self's father - wrote a book about it as a revenge for the mauling he received at the hands of the commission's planning barristers. "It struck me at the time as strange," he wrote, "that so many intelligent people should apparently accept trial by quantification as the only sensible or possible way of reaching such a decision."

The whole thing was a "psychological absurdity and ethical monstrosity", he said. He advised economists to take Dr Johnson's advice and kick a wall hard to convince themselves that the external world exists. His attack destroyed cost-benefit analysis for nearly two decades.

At least Roskill's team tried to do some subtraction, but somehow Heathrow's lobbyists convince people that there will be no jobs lost by making London dirtier and noisier and by accelerating climate change.  As if somehow you can construct a financial 'package' that will offset the noise.

And there is the rub.  What anyone who loves London wants to know is if there are any limits to the destruction of London's environment - especially today when the heat becomes intense and the air like soup.

I don't live there any more. But I don't want London to become any more of a third world city than it already is - the noise and air pollution visited on the poor, the ridiculous house prices visited on everyone, and the vanity runways for the international elite who can't re-arrange the existing runway slots to accommodate new priorities.

Go to some of the nearby suburbs, like Southall, to see where it leads. Dirty, overcrowded, polluted, ruined. That's the future for London by cost-benefit analysis.

Are there limits?  Would they ever stop? Or do we really believe the Heathrow chief executive who implied we had been vacillating about a runway for half a century, when the first runway was only built by stealth, and wartime emergency requisition powers, in 1946?

It isn't vacillation.  It's civilisation.

A very good piece, David, as ever. But I'm not entirely convinced.

Some of your arguments are that cost-benefit analysis has just been done badly (absurdly in some cases). Fair enough, but the remedy for that is to do it better.

More importantly, your main point - which I accept - is that some things just can't be measured in a proper way (the value of a very old church, or the cultural atmosphere of London), making comparisons very hard. Yes. But how, then, are we to make collective decisions? Surely numbers must play some part... mustn't they?

I think they do have to play a part, in their proper place. They are used to hide the fact that this is, in the end, a political decision - and it ought to be, because we have to balance people's rights and the future in ways that really can't be measured. Wht irritates me is these cost-benefit claims which are actually just hyperbole, with little or no basis in fact, like the 70,000 jobs claim.

No need for ANY new runways or airports. There is a limited supply of landing slots at Heathrow which should, like 3G, be auctioned off. The low-cost flights could go to Stansted, Birmingham or Cardiff.

At present we have the unacceptable scramble to buy a worthless airline -- Aer Lingus -- primarily for its 'grandfathered' landing slots! Our airspace belongs to us all. Make these airlines pay us what it's worth.

You've spotted already that this is just another aspect of LVT. But I've calculated that it could raise billions, reduce Heathrow noise, spread prosperity around the country. And keep the NIMBYs happy!