Lidl, Tesco and the need to control us all 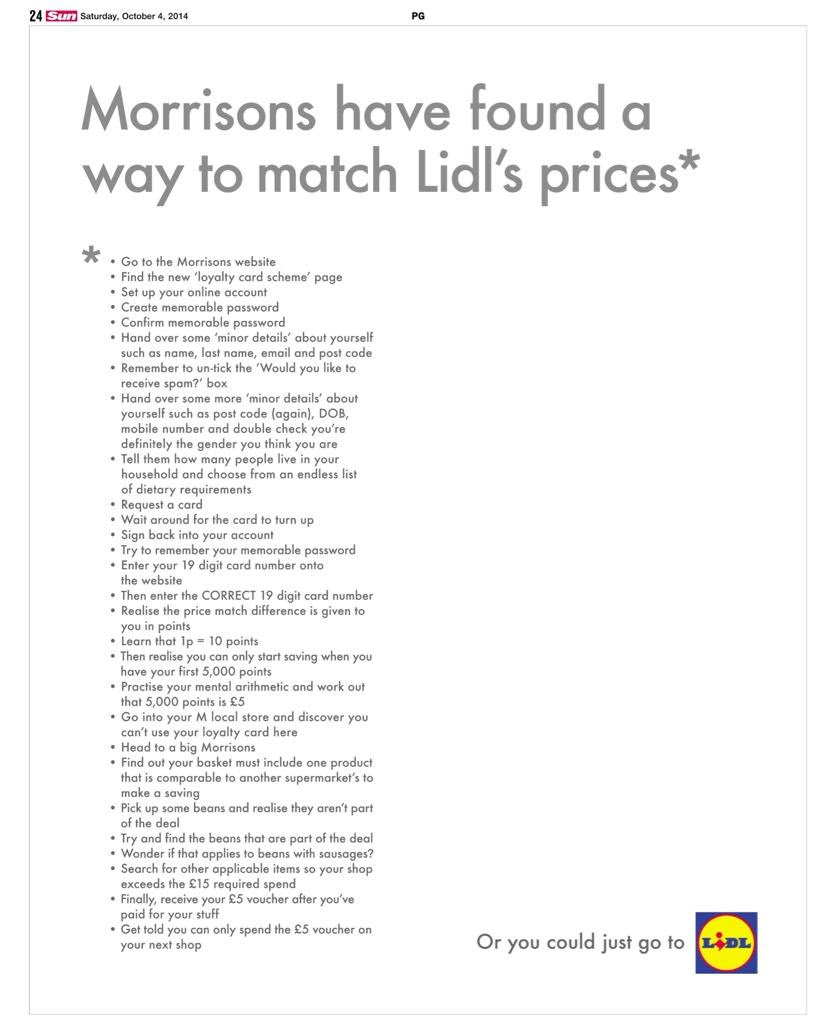 I've never felt much kinship with Lidl.  The bare, rather unfriendly aisles, the functional and inadequate space  for paying, never gives me much comfort to be there.  It feels somewhat alien, even now.  But I warmed to them when I saw their advert giving Morrisons a good kicking.

You can read it here.  It explains the palaver of getting a Morrisons loyalty card, fiddling around with passwords, remembering what food items qualify for the system of loyalty points.  As they say at the end: 'Or you could just go to Lidl'.

It must have enraged Morrisons, and so it should do.

The advert makes things horribly clear to me, especially since Tesco now seems to be on a terminal slide to takeover.

The first was that, if we had the sense to realise it, a 2005 survey by The Grocer - which I now can't find a copy of - should have given us a clue about what was about to happen.  It found that, of all the major retailers, Tesco was the bottom of the list for enjoying shopping there.

Waitrose came top.  I remember thinking at the time that the survey had identified something important.  It was simply unpleasant shopping in Tesco, from the badly designed aisles to the security guard peering at you.  What I didn't realise at the time was that there would come a time when this would be count.  When people understood that, actually, Tesco wasn't really cheap after all - even the street markets in London were cheaper at the time - then the fact that it was no fun to shop there would suddenly matter very much.

There was a kind of sneering atmosphere about the place - a bit like Ryanair - a smug, knowing attitude that people simply had to shop there because it was so cheap.  There was a whiff of contemptuous monopoly about it.  And the result now is all too obvious.

But Lidl's advert makes me realise how far that contempt has spread through the biggest organisations we deal with, public and private.  You read through the list of Morrison's instructions, padded out somewhat by the copywriters, and realise that the most important aspect of the way we are treated these days, by those who rule us, sell to us, supply us with energy or anything else, is control.

Tesco thought they controlled us.  The other utlities, banks, public services and superstores, have designed customer service systems primarily with control in mind.  They are designed to make us easier to process.

And then we wonder why people seem so angry that they are apparently prepared to vote for a party led by a man who used to sing Hitler Youth songs at school (sorry, the story was 'exaggerated', I gather).

Should have gone to Aldi, not Lidl! Both good - simple layout, reduced no. of lines (but all you want). But Aldi scores top because their price is the price you pay. They don't do BOGOFs!