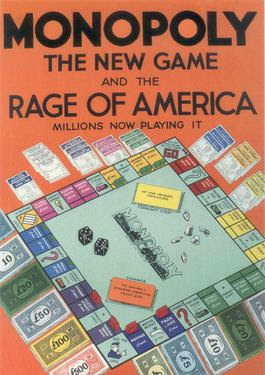 I don’t mean Monopoly, of course, a game designed originally by land tax campaigners to raise the issue – but the threat that comes to our economy and well-being from allowing companies to build up a stranglehold on their market.

Why don’t they get it?

Environment minister Owen Paterson is an intelligent enough fellow, yet he ranted on this week about opponents to GM crops as “wicked” and as a “dark shadow”.  For a moment it appeared that he didn’t understand what the objection is.

So in case he is reading this (hello, Owen!), here is a guide to what the economic objection is to GM crops as the only way to feed the world:

1.     The evidence that monoculture is the only way to feed a growing population depends on peculiar, monocultural surveys of crop growing in developing countries, which ignore everything unless they are the main product of any farm – giving an agri-business of view of what is actually the sheer diversity of small farms, and encouraging a wrong-headed and large-scale solution.

2.    Most evidence (Amartya Sen, for example) also suggests that small-scale farming is considerably more efficient than large-scale farming, certainly when it comes to how much is produced on marginal land.

3.    Diverse, small-scale farming – on which so many lives depend – becomes increasingly difficult if farmers can’t share seeds, which they are forbidden to do using GM technology, driving many into ruinous debt.

The technology itself may be healthy enough – I don’t know, I’m not a scientist – but this isn’t about science; it is about economics and the likely effect of increasing the power of the seed company oligopoly on the world market.

A generation ago, it would have been obvious – partly because the Liberal warning against monopoly was stronger – that this would have increased poverty.  Why not now?

Why don’t they see that it was Amazon and Google, two semi-monopolies, which failed to respond to their criticism about paying tax – and Starbucks (not a monopoly) which did respond?

If it helps small farmers now, then it does so despite the growing monopoly involved, not because of it.

Now, Owen, am I really wicked to say that?

1 - False or we wouldn't have fields & still be hunter gatherers.
2 - false
3 - false, obviously.
4 - nobody is forced to buy GM crops, indeed if they were more expensive and less efficient as you pretend to believe, nobody ever would buy them.

Glad you recognise there is no honest scientific argument but your "economic" one is obviously false. The real argument against is that you, your illiberal party and the entire "green" movement is opposed to human progress and every single honest person in your party has admitted it.

http://www.grain.org/article/entries/4808-seed-laws-in-latin-america-the-offensive-continues-so-does-popular-resistance
"The world’s agribusiness corporations are pursuing their attempts to privatize and monopolize our seeds. Behind their efforts is a clear goal: to make the age-old practice of saving and breeding seeds into a crime and gain monopoly control over seeds......"

GM Myths and Truths
Genetically modified (GM) crops are promoted on the basis of a range of far-reaching claims from the GM crop industry and its supporters. They say that GM crops:

Are an extension of natural breeding and do not pose different risks from naturally bred crops
Are safe to eat and can be more nutritious than naturally bred crops
Are strictly regulated for safety
Increase crop yields
Reduce pesticide use
Benefit farmers and make their lives easier
Bring economic benefits
Benefit the environment
Can help solve problems caused by climate change
Reduce energy use
Will help feed the world.

However, a large and growing body of scientific and other authoritative evidence shows that these claims are not true. On the contrary, evidence presented in this report indicates that GM crops:

Are laboratory-made, using technology that is totally different from natural breeding methods, and pose different risks from non-GM crops
Can be toxic, allergenic or less nutritious than their natural counterparts
Are not adequately regulated to ensure safety
Do not increase yield potential
Do not reduce pesticide use but increase it
Create serious problems for farmers, including herbicide-tolerant “superweeds”, compromised soil quality, and increased disease susceptibility in crops
Have mixed economic effects
Harm soil quality, disrupt ecosystems, and reduce biodiversity
Do not offer effective solutions to climate change
Are as energy-hungry as any other chemically-farmed crops
Cannot solve the problem of world hunger but distract from its real causes – poverty, lack of access to food and, increasingly, lack of access to land to grow it on.

Based on the evidence presented in this report, there is no need to take risks with GM crops when effective, readily available, and sustainable solutions to the problems that GM technology is claimed to address already exist. Conventional plant breeding, in some cases helped by safe modern technologies like gene mapping and marker assisted selection, continues to outperform GM in producing high-yield, drought-tolerant, and pest- and disease-resistant crops that can meet our present and future food needs.

Download a PDF of the full GMO Myths and Truths report
- See more at: http://earthopensource.org/index.php/reports/58#sthash.tv8GDJLh.dpuf

"The UK government’s Department for International Development (DFID) is using the aid budget to tighten the corporate stranglehold over the global food system.

This report reveals how DFID has been using hundreds of millions of pounds of taxpayers’ money with the express purpose of extending the power of agribusiness over the production of food, especially in sub-Saharan Africa. While this will increase the profits of corporate giants such as Monsanto, Unilever and Syngenta, it threatens to disempower small farmers and rural communities and condemn them to long-term poverty."

Yes, you read it correctly:

A leaked document has revealed attempts by the UK government to scupper proposed controls on food speculation ahead of negotiations in Brussels next Wednesday (6 November 2013).

New rules to prevent banks driving food prices up through financial speculation are due to be finalised in the European Union. But a memo sent by UK negotiators to their counterparts from other European countries last week reveals the UK government’s push to prevent major loopholes in the proposals being closed in the draft regulation.

The memo states UK negotiators’ opposition to strict limits on the amount that banks and other financial players can speculate in commodity derivative markets – a measure that campaigners see as essential to stop speculation destabilising food markets and fuelling global hunger. Instead UK negotiatiors are pushing for the continuation of a system of self-regulation under which speculators have been able to cause huge spikes in the price of foodstuffs.

The memo is likely to have been written by the Financial Conduct Authority (FCA), the UK government body tasked with regulating the financial sector, and the FCA would certainly have reviewed it. Yet the changes it is calling for would constrict the FCA’s ability to regulate speculators.

"By trying to weaken crucial regulation to curb food speculation, the government is putting the profits of big banks like Goldman Sachs before the fundamental right of people everywhere to access to food. Yet again, our government is doing the banks’ dirty work for them. The UK should be backing tough controls to stop banks gambling on hunger, instead of throwing a wrecking ball."

"Civil society groups (including ENSSER, Testbiotech, the Foundation on Future Farming, and the German Family Farmers Association) filed a lawsuit in March 2013, claiming that the European Food Safety Authority (EFSA) had recommended approval for the “stacked” GMO variety without carrying out proper risk assessments as required by law.

The variety is a complex one, containing traits for producing its own toxins and also providing resistance the Monsanto’s Roundup herbicide. However, in spite of Intacta’s potential for introducing novel proteins and unique toxic effects into the animal and human food supply, EFSA did not insist on any safety or animal feeding studies prior to approval, so its real health effects are completely unknown.

Ecological organizations are also deeply concerned about the new GMO soy, because of its potential for inflicting considerable damage in sensitive ecosystems."

"By slipping it into our food without our knowledge, without any indication that there are genetically modified organisms in our food, we are now unwittingly part of a massive experiment.

The FDA has said that genetically modified organisms are not much different from regular food, so they’ll be treated in the same way. The problem is this, geneticists follow the inheritance of genes, what biotechnology allows us to do is to take this organism, and move it horizontally into a totally unrelated species. Now David Suzuki doesn’t normally mate with a carrot and exchange genes, what biotechnology allows us to do is to switch genes from one to the other without regard to the biological constraints. It’s very very bad science, we assume that the principals governing the inheritance of genes vertically, applies when you move genes laterally or horizontally. There’s absolutely no reason to make that conclusion."