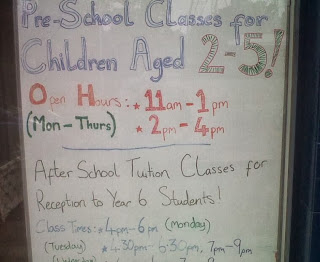 I came across this in a shop window near where I live (Crystal Palace) - in fact it is the first tutors that I've seen round here with a shop front, and it is filled with symbols of reliable-looking old-fashioned education, with sums on blackboards.  A fascinating development.

This is the stuff of my time of life.  The panic is beginning to grow in the breasts of people like me round here, with children aged nine, about what we are going to do about secondary schooling.

Every place is hard fought.  A carpet millionaire has taken control of most of the nearby secondaries (from Peckham to Croydon), which seriously reduces our choices.  And for those who really want to compete, well, the sky is the limit - but most of us don't, if we can possibly help it...

Still, I know of parents who have had tutors since the age of five or six, and are putting their children in for the great Rat Race - entrance exams for the super-selective grammar schools, every weekend, around the M25.

There is a kind of tutorial arms race going on.  If your neighbours are employing tutors from the age of five, then maybe you have to - are your children going to be left behind?  Of course, in those circumstances, those who can't afford tutors lose out.  And so do the poor forcefed children, of course.

The Kent grammar school test is to be tweaked so that it can't be tutored, which is - as most people know - quite impossible.

As I took this photograph, someone came up behind me and said: "She's very good, you know."  It was a kind of freemason's handshake, for those of us in the grip of the Great Secondary School Panic - a word in the ear, secretive, knowing.  But then, this is the first hint I have ever seen that the tutoring arms race is now affecting the lives of those aged two.

I have tried to pinpoint the source of the panic in my book Broke: Who Killed the Middle Classes, so I don't want to go into this now.  But part of it is undoubtedly the failure of successive governments to provide a major chunk of the middle classes with the kind of secondary schools they want - human-scale, friendly, inspiring, creative, nurturing...

And all they get to help them is school league tables, and I can't be the only one to be very dubious when confronted with the words 'outstanding'.  I know the way targets work.

So I was fascinated to see emerging at the same time a project for a new Crystal Palace Primary School, which lists its priorities as developing the following character traits:

I know that the free school programme has been flawed by the Department for Education's centralising grip, but the idea that people can be supported to set up their own schools - with safeguards of course - is a life-enhancing business, and goes with the grain of people's energies.

Yes, they should be be brought under the auspices of local authorities, but at least people are able to provide themselves with the kind of schools they want in the great black hole of south London.

Otherwise we may go our whole lives before the local authorities or Whitehall provide us with a school dedicated to instilling gratitude and optimism, rather than the Gradgrindian business of tutoring kids into an early aduthood.

Why can't we have the choice of a secondary school dedicated to optimism and gratitude?  Oh yes, I forgot, because the carpet millionaire is establishing his grip on the local secondary schools and he gets what he wants.
Posted by David Boyle at 10:11

This reminds me of a Channel 4 programme from roughly 1990 comparing the performance of classes of pre-schoolers in several countries. The starkest contrast was between a class in one of the leafier and most middle class outer suburbs of SW London and an inner city working class district of Budapest, Hungary.

The London approach was Govoid before Gove - formal teaching to a large extent. In contrast the Budapest approach was participative with instructional games to teach social skills.

In London one little boy called Jack was trying to write his name. He had managed to write a very wobbly 'J' then collapsed in floods of tears. The voice-over by an educational psychologist explained that he knew his name but did not yet have the physical dexterity to write it. She went on to explain that he should be doing colouring to gain that dexterity. Boys, being slower developers, are selectively disadvantaged. Jack's take-home from that day was that school was horrible and best avoided.

Meanwhile in Budapest the kids were playing a conga game. The teacher called out names spelt phonetically. When the children worked out who it was they all chorused "Jane" or whatever and Jane joined the conga. They learnt co-operation and that school was fun.

And here's the rub. Those working class kids from a school with minimal budget (immediately after the fall of the Soviet empire) by most measures knocked spots off those the middle class ones from Surrey.