The truth about authenticity 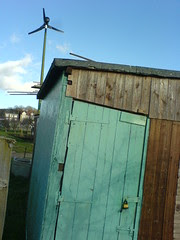 On one of the hottest afternoons of the summer, the comedy writer Jane Bussmann came down to the allotments that encircle my home in Crystal Palace to talk about authenticity.  The resulting radio programme struggles with the idea and it is rather good.

My only mild complaint is that the way it was cut made it sound as if the Canadian writer Andrew Potter was calling me a purveyor of "dopey nostalgia".

But then again, maybe he was.

Because actually, the authenticity debate - if there is one - is not really about a face-off between nostalgic romantics and hard-headed, world-weary post-modernists.  It is about the nature of humanity, and whether people need human contact.  whether they are suited for living permanently in a virtual world - or even an entirely ersatz one.  And it is about the truth.

My position is that people need the human element very much, and will fight to preserve the link to that - or at least the option of it - very hard indeed,  Not everyone, but enough people.

So Andrew Potter rather misses the point.  So does the Harvard University Press's contribution to the debate by James Gilmore and Joseph Pine.  Of course authenticity isn't an absolute.  We would be pretty suspicious of anything claiming to be completely authentic - it doesn't work for such a contradictory, mutli-faceted concept.

My own book Authenticity: Brands, Fakes, Spin and the Lust for Real Life came before either of them, and might sound a little starry-eyed by comparison - but actually I think it still stands.

I also think the debate is kind of going my way,   I've spent the decade since the book came out pouring scorn on the branding industry, which seems to me just to be a fancy name for image - and pouring particular scorn on the naive branding consultants who talk about people's emotional commitment to particular brands.

In fact, most people I know hate most of the brands they use.  They feel manipulated by them.

What I tried to say back then in 2003 was that, to genuinely feel authentic, companies needed to allow more human contact - or, as Anita Roddick used to say, to show more sophisticated emotions than fear and greed.

And now here is one of the world's top brand consultants, Chris Malone, saying something along the same lines.  I haven't read his book The Human Brand, because it isn't published yet,  But I read what he said in this week's Fortune magazine:

"Every brand is human, and every human is a brand.  how we damage our reputations and repair them is surprisingly similar.  It's about warmth ... it's humanising."

Quite right.  Authenticity isn't really about nostalgia at all, it's about how to humanise.

But then, if I was truly authentic, I ought to admit that the allotment Jane interviewed me on, and which they described as mine, is actually Sarah's.  I just cut the grass.  I'm not that authentic.
Posted by David Boyle at 08:58