What we should do about the Calais Jungle 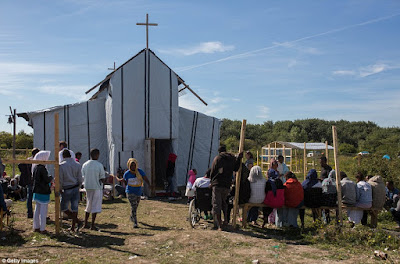 "Lots of folks back East, they say, is leavin' home every day,
Beatin' the hot old dusty way to the California line.
'Cross the desert sands they roll, gettin' out of that old dust bowl,
They think they're goin' to a sugar bowl, but here's what they find
Now, the police at the port of entry say,
"You're number fourteen thousand for today."

Yes, for those who recognise it, this is the first verse of Woody Guthrie's song 'Do-Re-Mi'.  It is a faint memory of how the dust bowl refugees reached a police line on the California border.

I was reminded of it by the tear-gassing of refugees, men, women and children, at the Macedonia border today - and on the same day that half the refugee camp outside Calais is being demolished, again with no concern for the children living there. Again, there were riot police and there will be again tomorrow. There was teargas too. The residents are supposed to go to 'official shipping containers'.

Among the buildings being demolished is the church (see above).

We may have no control over Macedonia, though all this talk about leaving the EU certainly doesn't help. But we are directly concerned with the Calais camp and history will judge us for the way we behave.

This is all easy to say, of course, since it isn't clear what should be done. Though it is equally clear that something has to be - and the presence in the camp, not just of children, but unaccompanied children, and former British army translators from Afghanistan, are all of them reasons why we will be judged by what happens there.

Here is my suggestion. There are something around 8,000 refugees who have risked their lives to be there. They will not be going back. So let's take them in and then close the camp altogether.

That is a once-for-all solution that hardly solves the refugee crisis, but it does at least remove the absolute scandal of the refugee camp on our border.

Is there any political party with the nerve to propose it?

Because, of course, there won't almost immediately be another 8,000 there building another camp, will there? I like your stuff and find you normally an original and interesting thinker. Guess we all have off-days.

It is a good deal easier to prevent another camp than it is to deal with it once it is actually there. But then perhaps today is an off-day too!

The migrants in Calais want to come to Great-Britain, no compulsory ID, no police brutality (compared to France, pays des Droits de L’Homme), no Neo-Nazis, easier to find a job thanks to the language and connections, more chances to pay their debt to people smugglers. For them Great-Britain is an Eldorado, even if it is linked to the TARFU that they are escaping from.

I wonder what their ancestors felt when Western Powers invaded to plunder their resources – goods and humans to create empires, probably like us, frightened and scared of the invaders, fearing for the future of themselves and that of their children.

Maybe we could ask Blair to house a few on his dime, he has many houses. Honestly, I feel Blair brings la poisse or la scoumoune to many. Only Jerry Hall must be thanking him, he torpedoed a Shanghai girl’s rag to riches story, and she nabbed Mr Burns in 6 weeks, but then I think headbands restrict blood-flow to the frontal lobe.