The insanity of high densities and the struggle to limit London 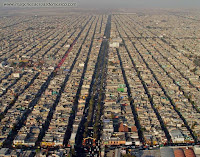 The leader of Richmond Council, a Conservative these days, has warned that London is set to become a mega-city on the scale of Rio or Karachi or Shanghai – with 13 million people by 2050.

I will be 92 in 2050 and unlikely to be popping up to London for the night life (though who knows). The question posed was whether there should be limits on London’s population growth to avoid this eventuality.

These are uncharted and uneasy waters to commentate in, let alone swim in. Is there hidden racism in his message? How should progressivcs react? It isn’t at all clear.

Yet, whatever his motives for raising the issue, this is a potential problem. More than a problem: if London was to gain in size half as much again, enough to fill two new boroughs, it would be disastrous for those who live there. The infrastructure (transport in the centre, schools in the suburbs) would be completely overwhelmed. It would be an overcrowded, unhealthy and uncongenial place, and that is the best one could say.

What’s more the most intense negative effects would be felt by the poorest, in the insanity of high densities, the pollution and noise and technocratic responses.

It is also clearly possible given the rapid rise of population since the 1980s, after a good seven decades when it was declining. It does have to be debated.

The difficulty is in the word ‘limits’ which betrays the current mindset of civil servants everywhere – that all you need to do is to set limits or targets and sit back and relax, job done. It says more about the fantasies of the current generation of policy-makers, that all they need to is to set down some numerical boundary.

The truth is that limits only have political cache, and they are only hostages to fortune if that is all they are. There has to be some humane and effective mechanism to limit the size of the city and to divert population, even perhaps to move population if people are willing.

This is not revolutionary. The Attlee government did precisely this to avoid what was then called ‘town cramming’, and they did it in two ways – bold and effective.

They set the green belt around London, not to be sacrosanct, but to be wide enough to prevent London growing any further. They also set out the first generation of new towns around London, built to high environmental standards and with their own work and economies.

We abandoned the new towns programme in 1976, thanks to Labour’s Peter Shore and his determination to focus resources on the inner cities, but we have been tiptoeing back there. Ebbsfleet has been designated a ‘garden city’ though it is probably more of a garden suburb (back to the old Edwardian debate).

There is scope for new settlements in the Thames estuary, but there is little scope to expand in the south east without reigniting the Auld Alliance of the 1950s – urban Labour authorities who wanted to keep their voters and shire Tories who didn’t want them decanted into their areas – which gave us the high rise flats disaster.

New settlements and garden cities in the north make more sense, but not if they end up like Corby or Skelmersdale, hotspots of high unemployment.

So what do we do? We think about what kind of devolution of economic power might make it possible to build thriving garden cities in the north – how in practice do we move shift business and government decision-making northwards? What kind of banking policies would shape a regional financial sector?

Second, we have to crack the local economic problem – how do we grow economies from scratch, a subject tackled in my co-written book People Powered Prosperity.

Finally, we have to tackle the opposition from London. The GLA, since the days of Ken Livingstone, has become a greedy, blood sucking creature, dedicated to the growth of London (motto: what I have I hold). Because if London is going to keep its own tax revenue, then it will also have to pay for the decentralisation of its population.

Actually, this may not be so bad for London. Experience of the last three new town programmes was that it was also immensely profitable.

A megalopolis is a monstrous energy-guzzling thing, inconsistent with human liberty or human dignity, caught between regimentation and disorder. We must avoid it at all costs, but the costs will pay for themselves many times over.

Hong Kong seems to survive, so I don't see the issue with density per se. The bigger problem is that, once again, this indicates London dominance and a complete failure for Osborne's "rebalancing" to amount to anything more than rhetoric. Expect more housing crashes, financial bubbles and more rent-seeking gone awry. People-powered prosperity? Pah! Who needs people?

All of this may also be predicated on the assumption that demographic trends in London are going to last. There's already plenty of evidence that inner London's housing market is stagnating, as those who can no longer afford it move to the outer boroughs, where prices are rocketing upwards. But of course, once inner and outer London both cease to be affordable, there'll be no choice but to leave the city altogether. Manchester and Leeds are doubtless sitting by the phone.