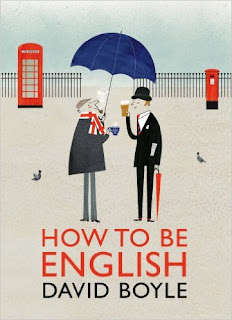 It is six months now since my book How to Be English was published, and I have seen it around on bookshop tables more than my books are usually seen. This is, of course, a thoroughly good thing.

But it has also made me wonder a little about the opposite. The book is full of those memes - a hundred of them - that might allow you to knit another English person from scratch. It hardly needs saying that I love and revere Englishness.

I say that even though I now live in the middle of Middle England, and every time I venture out in my car, someone hoots at me - often they wind down their window and shout. This may be because I'm an appalling driver, but I don't think so - or at least, I'm not prepared to accept it quite yet. I was never hooted at in London, and that wasn't through any lack of aggression on the part of London's drivers.

No, I think people drive differently here. They drive as car-proud people drive, with the rather pompous slogan which comes upon them behind the wheel: What I Have I Hold.

Because despite the great benefits and virtues of Englishness, there are drawbacks - and they are political ones. These are my five:

1. They don't like to make a fuss. My parents live in a small village in Hampshire - I won't say which. A local defence manufacturer allowed their chemicals to leach into the ground water which meant anyone not on mains water was forced to drink bottled water for nearly a year, while the water company dragged its lethargic limbs into action to put them on the mains. In any other country, there would have been a state of emergency - like the one in similar circumstances in Michigan - or at least some legal action. But in Middle England, no, nobody wanted to make trouble.

2. They are obsessively apolitical. I went canvassing in a by-election - also in Hampshire come to think of it - and found, in one relatively wealthy housing estate, that everybody was in and nobody, without exception, was voting. Not because they were apathetic, but because they thoroughly disapproved of the way the establishment parties posture. Not apathy, in fact, but rage - but not rage likely to make much difference.

3. They are boneheadedly unspiritual. This may be patronising to say so, and there are certainly many exceptions. But even in these enlightened ages, the Church of England remains too much dedicated to the spirituality of rising property prices. With a vague sense that the main thrust of Jesus' teachings had something to do with homosexuality (he never actually mentioned it).

4. They believe far too much in the objective reality of market values. Let's stick with the church. On two occasions in my adult life, the Church Commissioners - about as hard nosed and unspiritual a bunch of people as you are ever likely to meet - managed to lose a third of the Church's accumulated wealth because of their obsession with property. They then compounded the problem by selling up at the bottom of the market. I don't know what happened to them, but let's assume they managed to find their way into the honours lists.

5. They blind themselves to criticism. The American historian Barbara Tuchman famously criticised the British military for their bizarre tolerance of failure in the India campaign in 1942. Once you reach a certain level in the establishment, you can lose battles, mess up the customer service at HMRC, invade the wrong country at the wrong time, and you will still be a gallant, revered member, deserving of gongs.

This is what she said:

"No nation has ever produced a military history of such verbal nobility as the British. Retreat or advance, win or lose, blunder or bravery, murderous folly or unyielding resolution, all emerge clothed in dignity and touched with glory. Every engagement is gallant, every battle a decisive action, every campaign produces generalship hailed as the most brilliant of the war. Other nations attempt but never quite achieve the same self-esteem. It was not by might but by the power of her self-image that Britain in her century dominated the world."

So how, given these extraordinary weaknesses, do the English manage to make change happen? That remains a mystery. All I can say is that they do and, when the time comes, it all seems to happen very quickly. And it will again, and remarkably soon.

I generally agree about British tolerance for military incompetence, which has a long and proud history. But it has to be said that the leader of the retreat from Burma in 1942 (which must be the point of reference), William Slim, was probably the best general the nation produced in the whole war, as he showed later on. He showed humility and a capacity to learn from mistakes. He was also remarkably free of the race prejudice that was so much part of the British establishment outlook of the time. He much preferred his Indian divisions to the British ones. They did the same job on one third of the supplies, he claimed. And that was of no small importance.