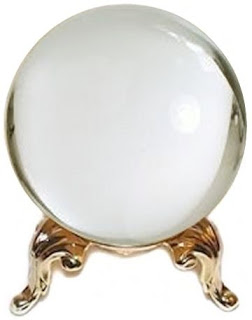 I had rather a good record in 2014, including calling the close result of the Scottish referendum, and felt rather proud of that. So it was with a heavy heart that I looked back to my first post of last year to see that I had confidently predicted that the Lib Dems would win 39 seats.

In short, the trick is not to extrapolate trends. The knack has to be to see beyond the trends.  My only successful prediction of a year ago was that the Ukip challenge wouldn't survive the general election, and that was in the face of the apparent trends of the time. So I didn't fail completely.

The 39 seat guess seems peculiar - especially as I have now forgotten how I worked it out - but it is a measure of how unexpected the general election results would turn out to be. They still hurt, and I was just a bystander.

So I hardly dare predict anything this year, only I can't prevent myself predicting that the EU referendum will look a bit like the Scottish one - rising panic on both sides and a result that is too close to resolve the issue.

That's prediction 1. Prediction 2 is the strange rebirth of the green movement - and built on the fears people have about fracking and nuclear energy, not for themselves, but for their children's health. If I was an elected Lib Dem, which heaven knows I'm unlikely to be this year, I would be quietly positioning my party to meet this challenge.

Prediction 3. Well, there have to be three.  I'd like too predict that my new venture, The Real Press, will be a swinging success, but actually I have no idea (though see my first book Scandal, available now, and about how homosexuality came to be made illegal so unexpectedly in the summer of 1885).

Perhaps it is that Corbyn will still be leader of whatever is left of the Labour Party in a year's time. One of the most peculiar feature of UK politics is actually how very little changes. All sides continue with staggering predictability.

Which is why I thoroughly commend Miranda Green's article in the Guardian on Saturday, where she singles out unpredictability as the single most important factor that the parties of the Left need to generate if they are going to make any progress.

She is absolutely right. And in the unlikely event that they manage to generate it, it will at least make the job of us political bloggers a little more difficult at New Year.

Well, 39 seats was always crazy optimistic, even before the benefit of hindsight. I'm not blaming you when I say that the Lib Dems always seem to exist in their own bubble and seemingly unaware of how they're perceived or why (then again, Labour's Corbynite wing is now even worse, given their obsession with Oldham as if Jim McMahon is some former Morning Star writer instead of a Blairite councillor).

But the LDs seemed to believe their support had arisen because they had attracted millions of people fascinated by classical liberalism, as opposed to a motley collection of the disaffected ex-Labour and those a little too left-wing to vote Tory. The subsequent collapse, to 8 seats, was surprising but not entirely shocking.