Bisexuality, dual nationality and the frustrations of identity politics 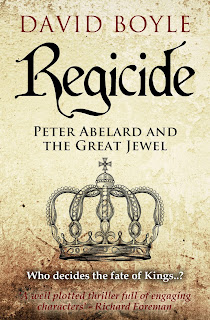 Why do I feel so frustrated about the new world of identity politics? I suppose because it is politics based on partial blindness, rather than understanding the whole picture. Because it accepts no progress except complete victory. Most of all, because everybody has to be one thing or another.

This is something I have discovered the hard way by writing recently about two people who were clearly bisexual.

Earlier in the year, my book about the criminalisation of homosexuality came out, and the narrative interwove the rather tragic story of my great-great-grandfather, who got caught up in the Dublin Scandals of 1884 (the book is called Scandal and it is selling quite well).

The trouble began when I wrote about it in The Guardian, and they used a headline that included the phrase 'my gay ancestor'.

I had not realised at the time how much a headline like that would irritate the doyens of identity politics. I mean, was he gay or not? If he was gay - as a number of people pointed out to me, rather forcibly - how could he have had children or great-great-grandchildren?

Nobody wants to fall foul of the ferocious commentators who lurk below the line in the Guardian, but worse was to come. One man posted no less than eleven messages on Facebook explaining that he hated the book (though not actually why). That means I can't necessarily claim him as an irritated member of the identity politics brigade - but I have to assume he was.

The one thing identity politics can't cope with is the idea of people being both/and... People who, as I am, feel European, and British, and English, and from Sussex, and from Steyning and from South London (born in North London). That is the essence of Liberalism, it seems to me - the acceptance of multiple identities.

More than acceptance, in fact. It is embracing these different aspects - in the face of those who believe that men and women, gay and straight, French, Scots and English, can't possibly understand each other because we are too culturally conditioned. In the coming struggle between humanist and postmodernist, I know I'm on the human side (for my definitions of these terms, see my book The Age to Come).

So whose side was he on? Was he gay or straight? Come on, David, don't sit on the bloody fence on this critical issue!

Well, the answer is that he was both, and in that spirit, let me put two fingers up to identity politics and nationalism of all kinds by reproducing here my translation of Hilary's famous Latin poem 'To an English boy'.

Those who know me well will know that I can't really translate Latin, at least well enough for this, but I can return other people's translation to the original shape of the poem with the rhymes and rhythms in the original places. Here it is (it is reproduced from the end of my novel about Hilary and the weird and mysterious death of William Rufus, Regicide):

I might add, as an aside, that the Regicide ebook is on special offer at 99p until Tuesday, and there is also a paperback version.

To an English Boy
By Hilary the Englishman (Hilarius of Orleans)

Hail to you, the handsome boy, who’ll never ask
For anything, no gift, no gain, no task,
On whom integrity and beauty bask,
Who captures all who see behind your mask.

Your golden hair and face I can’t resist,
Your conversation, but why make a list?
There is no flaw in you that I have missed
Except your vow that you just won’t be kissed.

Nature wondered for a moment, to employ
Its forces to make you girl or boy –
But while deciding which gender to deploy,
You leapt out male to give us all some joy.

Later, when she began to make you wake,
She marvelled that she could such a creature make.
Yet poor nature had made one mistake:
She still had forced you to mortality take.

Yet any other mortal can’t compare
With this unique son and nature’s heir.
Her beauty chooses now to live in you, in there –
Within your flesh as white and light as air.

Believe me, if Jove was ever to recover,
Then Ganymede would hardly be his lover.
You would be helping him discover
Wine by day and kisses under cover.

You’re loved by every boy and girl the same,
They sigh to hold your unrepeated flame.
Those who call you ‘English’ are to blame:
Change the vowel and use the ‘angel’ name.

See my book Cancelled! on the Southern Railways disaster, now on sale for £1.99 (10p goes to Railway Benefit Fund). One of my correspondents suggests that we all buy the paperback version (£4.75) and leave copies on the trains...

I think your labels are a bit confused (although you're not wrong); if anything, postmodernism rejects the singularity of identity.

Modern identity politics - the loud-angry-Tumblr-blogger kind, as opposed to the various civil rights movements which have been around for decades - strikes me as being what postmodernists would call second-order simulacra, i.e. symbols without referents. Reality reduces to academic theory which winds up reduced to opinion pieces in the left-wing media, which then wind up reduced further once they reach the blogs - hence it all winds up as reductionist as that process implies.

I think you mean "forefully", not "forcibly", unless someone actually beat you up.

That should be "forcefully".

Here's my take on the issue, for what it's worth.

I can't speak for girls, but young boys naturally seek the company of other boys. This seems to be Nature's way of keeping the sexes apart until they're ready for the responsibilities of parenthood. Toward the end of this period, which some might describe as a "homosexual" phase, though in the true sense of the word it's really nothing of the kind, a very strong friendship can form, which is easily mistaken for love.

Nature then intervenes, and most boys switch their affections to girls, but in a few cases this doesn't happen. The law as it stands today doesn't permit me to elaborate, and it's not my intention to cause offence.

Most people don't care what adults get up to in private. It's nobody's business if no-one is harmed.

The thing that does cause friction though, especially among the older generation, is the way something that was previously classified as deviant behaviour is now aggressively promoted in the media and in "pride" parades as a "good" thing. If they kept it to themselves, few would object, but most older people have difficulty accepting and "embracing" something they were brought up to despise as unnatural.

I'll probably be denounced as a "bigot" or worse for saying these things, but I'm of the older generation, brought up before the time of Harold Wilson and George Brown.

The content sensitive advertising is offering me "all gay cruises" - oh the irony!