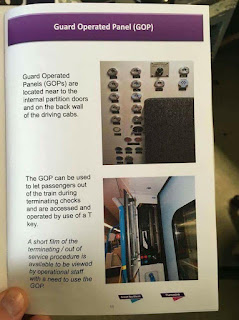 Southern Railways have a dilemma now. Are they going to treat their staff like human beings or are they
going to allow them to be captured by the great nutcrackers - between the RMT and the Department of Transport - that grind everything very small indeed?

So that you can understand this as the strike looms, this is the Real Blog guide to acronyms in the Southern business:

RDW: Rest Day Working. This is the process whereby the company drums up enough staff to do the overtime they need to get a basic train service, when they no longer have the flexibility to negotiate a few hours here or there to fill in the gaps. My understanding is that the will of the middle managers to fill these gaps has now largely given out.

GTR: Govia Thameslink Railway, the dysfunctional company that runs Southern, Gatwick Express and Thameslink, and which - despite serious staff shortages for the past two years - have failed to recruit the staff they need and are still processing voluntary redundancies. They are arguably the empty soulless cipher operating the tightest possible service agreement for the Department of Transport. It is their new inflexibilities that have prevented depot managers from cajolling staff into doing the overtime needed to run a basic service.

DOO: Driver Only Operation, the heart of the current dispute: GTR want to put guards in a customer service role on trains - without a guarantee that every train will have one - and give the responsibility to drivers to close doors and decide when to go, a responsibility they don't want. They say that the small CCTV cameras in the cabs are inadequate for safety on long trains and where there are no platform staff.

DFT: The Department for Transport, the spider at the heart of this tangled web, which have contracted GTR so tightly that they appear to have no room for manoeuvre. They are responsible for starving the south of England of investment money (at least south of London Bridge), leading to the constant breakdowns, and limiting the rolling stock GTR can use, hour by hour. It is the DFT which is insisting on driver-only.

OK, with me so far. Here are four widespread misunderstandings.

Misunderstanding #1. The collapse of train services are a 'sicknote' dispute. There is no evidence for this at all. In fact, since April, GTR staff off sick have been required to provide a doctor's note for each day off. The small rise in sickness seems largely to be down to the extreme stress which staff have been under as the service unravels.

Misunderstanding #2. The new GTR trains require drivers to operate the doors. That was what the company intended when they ordered the trains from Germany, but actually they have in the end been fitted with consoles for guards as well. So a compromise is possible.

Misunderstanding #3. The dispute is about pay. In fact, guards are turning down a higher pay settlement to lose their safety role. The dispute is actually about safety - and the long-term role of human beings on trains (if any).

I'm now off on holiday and am keeping my fingers crossed that the talks at ACAS can avoid a miserable crucifixion for GTR's courageous frontline staff on strike. I hope GTR and their paymasters can be big enough to pause the driver-only plan long enough for an independent review of it, especially about whether losing guards and platform staff together will break the Equality Act by preventing disabled people from using the trains - and there is some suspicion the appalling recent service may have already prevented them.

In the meantime, if you want an insight into the way the guards on Southern are thinking, the following was sent to me by a working guard (who wants to stay anonymous):

"Firstly, thanks for your well written, balanced and informative blog.

I have worked for Southern for just over [DELETED] years as a guard at [DELETED] depot. Until the last few months, I have enjoyed my job. In general, its pretty straightforward, interspersed with times of pressure and disruption. It's well paid, but highly unsocial hours with generally one day off a week for six to eight weeks, followed by a week of paid time off. In this way, the company balances our long days against our contracted hours over the course of the year.

Our working week is Monday to Saturday, and we are "contractually required", to use the company's phraseology, to work on any Sunday we are rostered for, which amount to around 23 per year at my depot.

It would seem that Dyan Crowther [GTR'S CHIEF OPERATING OFFICER] is unaware of our terms and conditions judging by the answers she gave at the recent [PARLIAMENTARY] committee hearing, saying we are only contracted Mon to Fri, and stating categorically that Southern was entirely at the mercy of the unions when trying to run a weekend service. This is simply untrue.
As I said above, I generally and genuinely like my job, despite its repetitive nature and unsocial hours. My job satisfaction comes almost entirely from giving the passengers on my train the best service I can on any given journey. Often, its simply ensuring I speak to them with a smile, and get them where they need to be, when they expect to get there. Its about making constant judgements, who needs a bit more help, who looks a bit lost, who has obviously had a rotten day and just needs to be left alone, who travels every single day and does their commute on auto pilot (or asleep).

When things start to go wrong, the nature of my job changes, and I monitor what's happening as best I can and try to give the passengers on my train the best info I can to get them on their way, what's running, what's not, where best to change or alternative routes, etc.
The last few months, however, my job has changed dramatically, I cannot do a decent job, day to day, I'm unable to give those poor long suffering people a decent level of service, and I am left stressed, unhappy and demoralised."

I hope GTR managers can now provide the support and loyalty to their staff that their staff have given in near impossible circumstances over the last three months.

See my book Cancelled! on the Southern Railways disaster, now on sale for £1.99 (10p goes to Railway Benefit Fund). One of my correspondents suggests that we all buy the paperback version (£4.75) and leave copies on the trains...Subscribe to this blog on email; send me a message with the word blogsubscribe to dcboyle@gmail.com. When you want to stop, you can email me the word unsubscribe
Posted by David Boyle at 07:30

Why is is wrong-headed to nationalise?

The policy of the government department is subject to political direction. But how do you propose to remedy the long-standing dysfunctionality of the company, if the company stays in place?

Not by handing it over, lock stock and barrel, to the cause of the mess!

How would you feel about renationalising under a Labour Government?

Slightly off-topic perhaps, but it seems to me that all this chaos on the trains could be part of a larger overall agenda on the part of an increasingly tyrannical government. There's certainly more to this than meets the eye.

We know all about the seemingly-planned chaos on Southern trains, but there is also a lack of proper infrastructure maintenance throughout this part of the network, resulting in further delays practically every day, be it potholes appearing under the track, a collapsing embankment on the Eastbourne-Lewes section a few months ago, level crossing failures, power supply problems and the almost-daily "signalling problems", none of which can be blamed on Southern, but all of which (in my opinion) are the result of (deliberate?) mismanagement on the part of government.

Brighton and Hove buses, another part of the "Go Ahead" group, are just as badly run, with bullying and staff shortages, leading to talks of a strike.

As well as all this though, EVERY road in the area is in a bad, and often dangerous condition, with potholes, some quite deep, and numerous holes dug for no obvious reason, left for weeks and then badly filled in, resulting in the new surface sinking within a few weeks. Today I saw a major road with large, deep longitudinal ridges resembling waves on the sea.

This may all be about saving money, but if internet reports are to be believed, every modern vehicle is capable of being controlled remotely by the government.

Not everybody will agree with me on this (until it's too late), but "the government", of whichever party, is becoming increasingly totalitarian, and for the past few decades has been taking what David Icke might call "baby steps" toward re-creating Communist Russia here in Britain, imposing things like political "correctness" - as just one example - straight out of the Communist Manifesto of 1848.

If the government ever decides to restrict private travel, they have a ready-made "kill switch" in every vehicle that they could use, individually or all at once, any time they choose.

It's all to do with travel and transport.

I hope I'm wrong (and I'm not really a believer in David Icke's theories), but it all fits. Disrupt the trains, same for the buses, let the roads disintegrate or repair them badly. Force people to live and work within their local area, as happened in Russia under Communism.