Why disasters get covered up, and how to stop this 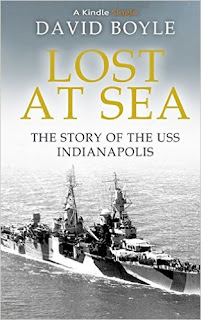 Regular readers of this blog (if there are any now that I’m no longer a regular writer of it) will know that I also have a minor side-career as the author of short books on naval history.

That’s why I have a new book out, about the sinking of the cruiser Indianapolis in 1945. It’s called Lost atSea.

Why am I so fascinated by naval history? Well, the answer is that my grandparents lived in Portsmouth and I learned to love the green smell of the harbour as I watched the navy creep in and out past the Ramparts.

But there is another reason, and it is why I feel free to write about this also in a blog about politics, public services and the future. Because naval history is a kind of laboratory for studying the history of how systems work.

That is why the Indianapolis story is so relevant to modern policy. It is worth reading about for a variety of other reasons too.

The Indianapolis carried the components of the first atomic bomb to be dropped on Japan to Tinian Island, from where it was to take off.

When it was torpedoed on the way back again, it constituted the biggest loss of life in any wartime disaster for the American navy, in any war (over 900 were killed).

It is also said to be the biggest recorded attack by sharks on human beings, but that has remained controversial since the days of the 1977 film Jaws.

The point is that the Indianapolis sank, torpedoed by a Japanese submarine, in just twelve minutes. It was sailing without an escort and the distress signal was never confirmed to Guam, so it was ignored and later suppressed. For nearly five days, the survivors drifted alone in the Pacific, without food or water, surrounded by sharks.

The loss of the ship was announced by the US navy just as President Truman announced the end of the war.

Embarrassed about his blot on their heroic war record, the naval authorities mounted a cover-up which led to the execration and court martial of Indianapolis’ captain, Charles McVay (he was rehabilitated, many years after his death, with the help of the submarine captain who had sunk his ship).

I wanted to set out how bureaucracies can do this, and what can prevent them. Because they do, and even enlightened institutions do, like the BBC and the NHS. They cover-up, blame the victims, close ranks and dissemble, just like an officer in the South Yorkshire Police. The question for us is how we can prevent it.

The answer is always the same and Karl Popper set it out just as the Indianapolis disappeared below the waves. It is to have the kind of society where frontline staff and ordinary people can challenge the hierarchy or entrenched monopolies that rule them. That is how societies and organisations learn.

It is also one of the reasons why the Second World War was won – because tyrannies and centralised, authoritarian bureaucracies can’t learn. It is the cornerstone of modern Liberalism.

Hmm...Stalin won the second world war. But, he did let his Generals conduct the war.