Columbus, Monsanto and the monopoly peril 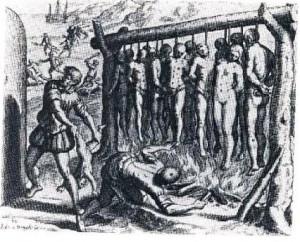 A decade or so ago, I was finishing my book about the relationship between Columbus, Cabot and Vespucci, and their race for America (you can buy it here as an ebook these days I’m glad to say).

I became convinced that the real story there was the friendship between Cabot and Columbus and their joint decision to corner the market on the western route to China, which they both believed they had discovered

It is impossible to prove this, and I’ve gone into the evidence for it elsewhere. But their key innovation wasn’t so much the ships or navigation of any of the usual detritus of exploration. It was their new kind of monopolistic contracts, their intellectual property on the route.

If they had succeeded, they would have taken a slice of the proceeds of every trading voyage to the New World for the foreseeable future. The court case that finally decided on Columbus’ contract lasted until the eighteenth century, so he nearly made it. It would have made them the richest men in history.

It is a surprisingly modern story. In the centuries that followed, doing business meant making things or servicing things. Increasingly, and partly thanks to the internet, companies are learning unwittingly from Columbus and Cabot. They are trying to take a slice of every transaction – not to make or sell, but to own the infrastructure that makes selling possible in every market.

Google and Amazon are doing that by providing a platform that everyone has to use. Visa is providing the electronic means of exchange. Others like Vodafone and Paypal are attempting something similar, though with less success, via the payments system. Other retailers, like Tesco, aspire to sell everything.

These things matter because they are done in the name of free trade, but the truth is they will make real, Liberal free trade quiet impossible without their permission.

It’s funny when every event, especially in business, gets widely reported and nothing seems to escape the online hoover, then something of real significance can go by virtually without a mention.

I’m referring to the decision by Amazon to try to corner the market on private label retailing, undermining the struggle to raise money by any entrepreneur involving e-commerce.

This is interesting for a number of reasons. For one thing, it demonstrates graphically how innovation can fail to produce an outpouring of entrepreneurial activity, as it should do – if the platforms are controlled by monopolists.

For another thing, it explains a little why the IT revolution appears to be leading us down a path of serious economic consolidation, and for the same reason: if it is dominated by a few controlling companies, then the benefits will not be spread about.

Then, what should come along but the revelation that the chemicals company Bayer wants to buy the GM seeds conglomerate Monsanto, a merger which will allow one giant company to dominate global agriculture.

Again, the BBC witters on about how the science of GM food is becoming clearer and safer, when you wonder why neither the commentators nor the scientists understand where the threat lies: in the monopolistic ownership of seeds and seed technology.

There is undoubtedly an issue with the % cut platform monopolies, like Uber, AirBnB, Apple App store etc etc, but to say "they will make real, Liberal free trade quiet impossible without their permission" is preposterous. The Open Source movement is one example that demonstrates how many Davids can ultimately crush the Goliaths of the day (Oracle, Microsoft, IBM).

Look back only a few decades, and we can see how the music distribution industry ripped off musicians and controlled what we heard. Any yet the internet has allowed grass-root musicians to take take control. Monopolies are not new, and the IT revolution has not been one-traffic in monopoly terms.

To say the IT revolution is leading to serious consolidation is to ignore the consolation that is occurring in all industries in the globalisation era, and the explosion of small scale entrepreneurial activity that these platforms have fostered. We live in a world where even David Boyle has set up a publishing house courtesy of these evil platforms! But don't forgot, you have the power to sell independently of these platforms too - they don't control the internet.

Managing monopolies has been a challenge for national governments for centuries. It is now little different to 100 year years ago. Spreading the profits of today's organisations is a simple enough problem, if only politicians were not left to make the decisions. Fortunately, in the end, even they will sort it out.