Jutland, stories and the Hay Festival 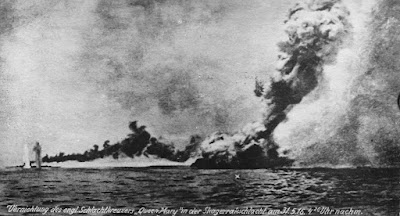 I have always been fascinated by the sheer scale of the Battle of Jutland. I spent months researching the battle at the age of 13 when I should have been revising for common entrance exams (yes, I went to a private school) and I've never forgotten it. Especially today, on the centenary.

Even now I find myself thinking of the 5,000 or so people killed agonisingly in the destructive explosions on board the battlecruisers Indefatigable, Invincible and Queen Mary, trapped in air pockets as their ships disintegrated. And the thousands killed in the German High Seas Fleet too.

As the second one exploded just behind him, Sir David Beatty famously muttered "There seems to be something wrong with our bloody ships today." What is less remembered is what he said next - "and with our system".

Beatty is fast becoming the baddie of the story, but he was right about the system being wrong (and the ships too, come to that). And it is the system that I was writing about recently in my short book Before Enigma.

It is easy for us to say - well, how different history would have been if we had cracked the German naval codes as we did in the Second World War, but the truth is that actually we had.

I tell the story in the book about how this opportunity to end the war was lost because the system for using that information was wrong - and it's a lesson for government and management even now.

You can explain a lot using stories.

I'll also be bringing copies of my new book of local economic stories, Prosperity Parade. If you're anywhere nearby today, do come!


Subscribe to this blog on email; send me a message with the word blogsubscribe to dcboyle@gmail.com. When you want to stop, you can email me the word unsubscribe.
Posted by David Boyle at 23:41