What's air pollution and depression got to do with it? A lot. 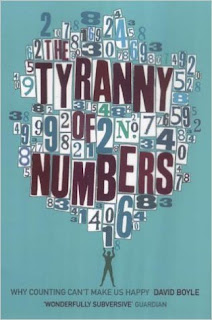 I have mentioned before, perhaps too much, my conversation in 2000 with a prominent minister in Tony Blair's cabinet about my book The Tyranny of Numbers. I told him I was writing a book that was sceptical about numbers and counting.


But what else can we do, he asked? I remember his look of confusion. It was as if he would have liked to approve but just couldn't.

Since then the controversy about targets has almost left me on the winning side, yet somehow without anyone taking on the basic argument about measuring the unmeasurable with numbers.

It's a paradox, and that is a difficult idea for data-crunchers. How can the data say two opposite things at once? Impossible!

So was delighted to read a prominent and thoughtful article which took the argument further in the Guardian on Saturday, by the writer Andrew Smith, who applied the same argument to the way in which IT systems have so persuaded us that the numbers they generate are real that we have begin to lose the possibility of scepticism about it.

It is worse than that. This is what he said:

"So, converting the world into numbers in order to process and make decisions about it: what does this remind us of? That’s right. We are becoming our computers. An idea that might sound shocking, but will come as no surprise to anyone familiar with the work of the media philosopher Marshall McLuhan..."

That is the frightening side of what is happening to us. We are losing the ability to understand that there is anything beyond the data, any grey areas of ambiguity. We still have a vague sense - especially those of us who don't work in Whitehall or big corporates - that there other realities. But will we understand that still in a decade's time?

Or will we read Dickens' Hard Times with mounting incomprehension - what has he got against Thomas Gradgrind, for goodness sake? He is just measuring success in education...

It is that impoverishment of our intellectual wealth that is the real problem. And in the meantime there is a more immediate problem: those who run the world are more in thrall to the data than anybody else - and consequently have lost the ability to make things happen. They suffer more than they should from unintended consequences, because they don't understand ambiguity. They don't understand human beings.

Unless of course, as Andrew suggests, human beings are also changing.

Richer but not happier? Sorry - brain doesn't compute. You're talking gobbledegook - or so they will say.

This was the crux of the article: those who can no longer distinguish data from reality already are yesterday's economists. They are clever people, but unfortunately pursuing one single bottom line number renders you stupid and ineffective.

And by 2025, if anyone runs across this maverick blog post, let's hope they don't have it evaluated - because 623.6 and I'm afraid I am by definition insane and must be carted off for failing to understand the data. Surely everyone is getting richer aren't they? What's air pollution and depression got to do with it?


AND! My ebook Jerusalem: England's National Anthem  is on special offer for 99p this week. There is also a conventional print version here.

Subscribe to this blog on email; send me a message with the word blogsubscribe to dcboyle@gmail.com. When you want to stop, you can email me the word unsubscribe
Posted by David Boyle at 11:57

Excellent, as ever, David.

But have (some) pity for the Minister. Those in positions of power rely on numbers more than ever because (1) data is easier to manage than before and (2) the scale of many things have increased, which gives numbers - easier to scale than other things - a comparative advantage.

(1) To proffer leaders a better method of management/leadership/oversight which seems as simple as numbers; or
(2) To help leaders reconcile greater devolution of their decision-making with their continuing to have authority; or
(3) To make the case that management-by-numbers is catastrophic, ie even worse than you have made it out to be so far.

There may be other options, and the number of options you have may or may not be an integer. But the illusion of clarity and objectivity that numbers provide is yet to be overcome - as, I hope, this comment by me shows.

Brilliant, your analysis is spot on and I'm glad you are writing.

Increasingly the rhetoric of politics feels like a Kafka novel that bears little resemblance to normal people's perception - or mine anyway.

In my view the elephant in the room is the inability of institutions to value our humanity: I mean our ability to trust, be kind, appreciate beauty, laugh, form friendships and care for one another, to give loyalty and act honourably, create and recreate, be irrational and spontaneous. We are sensory beings with extraordinary consciousness. Our humanity is being shrunk and quantified (for control and marketing purposes)or ignored.

Part of the problem lies in the use of exclusive technical and professional language. In previous centuries religion spoke a different language. Today maybe only the artists are left. Will computers have programmes for soul and spirit and love?

I think that is why people are disconnected from politics and their infernal tricksy numbers, tick boxes and computerised control. I think it may be because politicians and technocrats do not have the courage to be real in case they are accused of being weak. Which brings us back to the Emperors New Clothes.