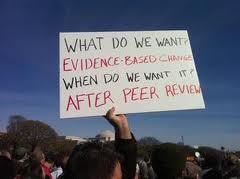 For some years now, I've been pedalling the idea that 'evidence-based policy', as described by Whitehall, is often a means of avoiding doing anything.

Our official standards of evidence are somewhat naive.  Because it relies on hard objective evidence in numerical form, which - because the objective numbers are chained to descriptions (anything but objective) - is pretty much impossible to find.

Evidence-based policy can so often be the endless search for evidence which will never be forthcoming.  A recipe for permanent inaction.

This is not to say that we need policy without evidence, of course.  But that is another story.

But what I find strangest is the way that, even when evidence is forthcoming, it still seems to take a generation or so to work its way into policy - especially if it is in any way inconvenient.

The evidence that is pouring out of Holland, for example, on the health impacts of trees and green space in cities might be water off a duck's back to planning authorities.

And what are we to make of the evidence about the health impacts of loneliness, set out in stark terms in the Guardian today?

These were taken from an important report revealed in Chicago over the weekend by Professor John Cacioppo.  The health impact of loneliness seems to be equal to heavy smoking.  Well, it is evidence of a kind.

But even among the researchers who have understood these things, there seems little understanding of policy options.  Governments seem to believe that loneliness is none of their business, despite the financial costs.  But even the scientists, since they usually seem to be doctors, fall back on medical interventions - with proposals for various kinds of psychotherapeutic interventions or shared talking therapies.  Friendship pills can't be far away...

It is nearly fifteen years ago since I was involved in launching the Rushey Green Time Bank, at a GP surgery in Catford - still going strong - and it seems to provide a glimpse of a solution.

It means setting up the kind of mutual support infrastructure that gets people together, not to talk (except incidentally, of course) but to do things: visiting, befriending, giving lifts, visiting people just out of hospital, fetching medicines, doing small repairs...

In short, doing all those things which we kind of imagine public service professionals might do but never will - broadening and deepening our services.

Loneliness is going to be solved, not by encouraging people to talk about their isolation, but by organising a mutual support infrastructure, on a huge scale, though public services.

Because, in the end, if people feel they are playing a useful role - which is denied so many recipients of our services - it can transform their lives.

But this is tough for the wonks to grasp.  They want to treat people or involve people or get them to talk.  Anything, it seems, rather than finding ways of encouraging them to act.  Strange.  The fear of action by ordinary people runs very deep.

But there is an alternative if we fail.  We can do what the Chinese have done: pass a law forcing children to visit elderly parents..
Posted by David Boyle at 17:25

I remember well the first day at Rushey Green, surveying 'patients' to identify things they might 'need'. One lady was defensive and watched me from a distance after I had interviewed her. She came back later to ask why I had spent more time with others. Turns out I had asked her the questions the wrong way around - I had asked her what she wanted to receive - yet she was too proud to say her needs. So I then asked her what she could offer and she was ready to reel it all off - to walk other people's dogs, babysit, garden, do out-of-hospital phone calls. If I had started with THAT in the first conversation we would have got off to a much better start. There is the nub of it: the medical profession is all about fixing the broken; we need a different system to simply release the natural innate skills and energy that our society has managed to block and de-energise with its consumerism, individualistic approach. Seems to me that the governments role on this should begin and end with facilitating community spaces - the parks, concerts, theatres, playgroups, lunch clubs etc where culture is explored and enjoyed and people can be. Not sure it needs any evidence at all - it is plain common sense....

Loneliness is none of the government's business.

Evidence-based policy is an oxymoron, of course. Even if you had all the evidence in the world all it could tell you is how to meet a given goal.

Policy is about deciding which goals society ought to be seeking.

And no amount of evidence can tell you that, because that's a question about values.