Banking bonuses: the twilight of the dinosaurs 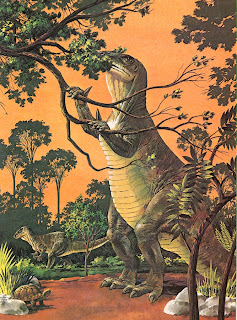 To my great shame, I still have one bank account with Barclays.

I was going to move it to the Co-op before discovering what everyone else seems to have always known, that the Co-op sends hefty donations to the Labour Party.  The trouble is that I want my bank account to support real change...

So it seemed like a choice between two old dinosaurs, so I didn't move.

But we customers of the Barclays dinosaur have been given the privilege - given that there are 48 million of us worldwide - of stumping up on average £50 a head to pay their £2.4bn annual bonus bill.

I resent this not just because of the money, but because the damage those bonus payments make to my life goes some way beyond the £50 I have paid.

The bonuses are a reward mainly to their investment bankers for further unbalancing the global economy.  The proportion of it that stays in London is recycled mainly into raising house prices, to the extent that my own children will not be able to afford to rent or buy in London without joining financial services themselves.

All of that might be forgivable if Barclays was supporting enterprise in the UK, but it quite patently is not doing so.

More on the peculiar way that this, and other policy decisions of the past 30 years, is undermining middle class life and values in my book Broke: How to Survive the Middle Class Crisis.

I agree with Labour's Cathy Jamieson that we need a bonus tax, though I am equally aware that a bonus tax will tend to be avoided.

But the real issue goes beyond taxation.

When the rewards of dealing in money are out of all proportion to the rewards of genuine enterprise, then there is something more fundamental wrong.  I don't know what the solution is, but I can say two things about it - any solution is going to have to move towards global action, and it will need to restructure banking so fundamentally that its potential rewards no longer unbalance the world.

That is, of course, easier said than done.  So I've been wondering whether there might be any benefits at all to the nations which move first.

They will lose the banking profits to tax, of course - which appear to be used as a justification for almost any abuse and tyranny at the moment.  But they would gain something else: an effective, useful banking system would mean a hugely more entrepreneurial culture, much more widely spread through the national economy.

Which would you chose?
Posted by David Boyle at 12:22