If Freud, Trotsky and Hitler had met... 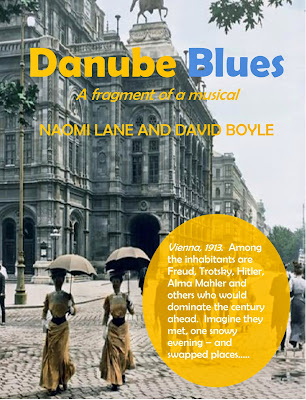 Did you know that Freud, Trotsky, Hitler and many of the other big names of the twentieth century lived within a few streets of each other in Vienna in 1913?

Well, they did. Now, imagine for a second that they met one snowy night in January, in Freud's favourite bar. And imagine, thanks to a bizarre bet which is slightly misunderstood, that Freud and Trotsky swap places for a day to understand each other's worlds.

With me so far? Well, that is basically the plot of my musical Danube Blues.  Since writing it, two rather good things have happened.

The first is that Naomi Lane has written the music, at least to some of it - and Naomi is a phenomenon.  She wrote her first musical when when was 14 and is doing her A Levels as I write now.  Her music is fabulous too.

The second good thing is that we are performing four of the songs, a fragment of the musical, at the York New Musicals Festival on Saturday at 4pm.

If you happen to be near York over the weekend, it would be good to see you...