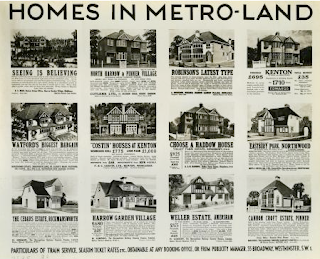 There is always a certain amount of snobbery, inverted and otherwise, about suburban semi-detached homes - especially those built between the wars, with their generous gardens, their little garden gates and garages and their twee stained glass front doors.

They were designed without the aid of architects - their major sin as far as the architectural press is concerned - but they have been probably the most successful house design in our history.  There are other people who don't believe anyone should have a garden.  There are more perverse types who say, like Marie Antoinette, 'let them live in flats'.

Don't believe a word of it.  There is something civilised and dignified about the semi and, yes - since you ask - I live in one myself.

I don’t know exactly what mine cost to buy originally in 1937, but it was somewhere around £700. In those days, the average mortgage cost ten per cent of your income and was paid off in fifteen years.  The gardens were designed in the early years of Ideal Home magazine, to include space for hens.  My own home is almost surrounded by a huge allotment space in northern Croydon.

This isn’t just a London phenomenon, or just confined to house prices – the same process have pushed average rents in London so far that you need a salary of £38,000 to rent a one-bedroom flat.

Which brings us to the latest cabinet 'rift'.  Now, when the newspapers say there is a cabinet rift, it usually means a mild difference of emphasis.  Perhaps the real worry is when they claim there isn't a rift.  The latest rift described in these terms is between Nick Clegg and the Treasury and it is about housing.  This is what he said in an interview with Nick Thornsby on Lib Dem Voice:

"But I totally agree with you that it would be real folly to simply go for easy wins on boosting supply of mortgages that doesn’t lead to supply of new housing. It’s probably one of my greatest frustrations that many of the levers that government can pull in housing can take a very long time to feed through. I’m like a stuck record round the cabinet table."

Clegg is quite right about this, and new housing is urgently needed.  But there is a misunderstanding here, which is going to be tremendously important, and which seems to be shared by all politicians.  It is the assumption that house price inflation is just a matter of demand and supply, whereas all the evidence is actually that it is about too much money in the system.

Of course, supply of housing isn't irrelevant.  But solve that problem and the house prices will still rise - as they did under Blair and Brown because people were being lent four times joint salaries rather than three times one salary, and as they are now because of bankers bonuses and investors from the Far East.

Yes, we need more homes.  But the reason so many sites with planning permission are not being built is because people can't afford to buy the homes, and they are not in places which can be advertised as good investments in Shanghai and Singapore.

The staggering 20 per cent rise in London rents over the last year is also because of rising property prices - this isn't about home ownership versus renting.  It is about the best way of getting a roof over people's heads, where they need to live and with the maximum amount of control.

I believe that is best provided by mass home ownership.  The idea of a "property-owning democracy" as the basis of human liberty was articulated by Conservatives but derives from renegade Liberals in the Distributist movement in the 1920s, and it is absolutely right.  But it is completely incompatible with allowing our homes to become a tradeable commodity on the international markets.

It is also completely impossible if my small semi is worth half a million pounds, and - far from solving the problem - the Funding for Lending scheme will push up prices to even more tyrannical levels, even if huge numbers of homes are built.

I use the word 'tyrannical' deliberately.  Because people are less free when they have to pay half their income in housing costs or more, less in control of their lives and much less able to follow the career and life path that thrills them most.

This is a far bigger and more potent issue than it seems, and I don't want my children eking out a living in indentured servitude to their landlord, in a job they loathe but need just to pay the rent, and unable to live near where they were born.  It is the very opposite of civilisation.

Find out more in my book Broke.
Posted by David Boyle at 11:34

I see you've been watching MetroLand!

I agree with most of this, but I think you underestimated the role of supply constraint. Large increases in money-supply don't lead to above-inflation rises in goods with elastic supply. Neither can one land-bank if there is a risk ones neighbour might build first.

As a scion of MetroLand myself, I can tell you they're great homes. They were also built by private developers at no cost to the taxpayer. I'm sure at the time people decried the loss of rural Middlesex, but all I ever knew was suburban "Middx" (or rather, the London Borough of Harrow) and nobody seemed to complain.

So the good news is that there is an answer for your children, which is to build a modern MetroLand. There's plenty of room around Coulsden.

Tom, thanks so much for your message. Two things: isn;t the point that there can never be an elastic supply of housing, even in the most deregulated state, so the main impact on prices is bound to be the amount of money pumped into mortgage finance.

The other is about Coulsdon, I'd prefer the garden city approach, but I take your point. But the real question is this: could the private sector now build affordable homes like they did now? Costing £40-60,000? And if they can, why don't they? With 400,000 homes unbuilt with planning permission, it isn't planning.

This article explains why things are not sold at cost