Tough on the causes of UKIP

I have been contemplating the strange thought that a quarter of the population voted for UKIP and Nigel  Farage's slightly dodgy populists - the same proportion of the vote that the Labour Party won in 1983 (also, as you may remember, the Liberal-SDP Alliance, those were the days...) 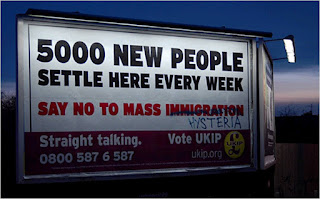 This doesn't mean that Farage is going to be prime minister or that they will win any seats at the next general election - I suspect UKIP are about as far from being able to 'target' seats as it is possible to be.  But it is worrying, and - if Kenneth Clarke calls them clowns a few more times - they might even win more votes.

It is worrying because there is a grain of truth in Farage's claim that UKIP are outsiders, battering on the doors of the establishment from the real world.  Populism is not a bad thing in itself - only when it is used to drum up hatred - but the political establishment would prefer to drink their own blood rather than drop their technocratic utilitarianism.  This is a potent fertiliser for populists like UKIP.

But the real reason why we are experiencing this populist uprising is the pressure on the middle classes.  This is what I wrote at the end of my book Broke: Who Killed the Middle Classes?, published last week.  It is about the political implications of the impossible economic pressures that are building up on the middle classes:

"Karl Marx has long been dismissed for his predictions that the bourgeoisie would eventually disappear and usher in the new revolution. It never happened. Quite the reverse, the bourgeoisie and petit bourgeoisie burgeoned in size, bought their own homes and started reading Country Homes and Interiors. But what if Marx’s prediction was correct, but just a little delayed, and capitalism were to culminate in the proletarianization of the middle classes after all? What would happen then? Some kind of revolution or, as Fukuyama predicts, some kind of populist uprising from the right? The latter seems most likely at the moment, given that most of Western Europe is struggling to survive a financial crisis brought on, predictably, by the tight constraints of the euro. A thriving middle class would provide an inoculation against that kind of upheaval, but if they are not thriving – what then?  Some of the peculiar backward-looking political movements emerging on both sides of the Atlantic may be symptoms of the busting of the middle classes, including the Tea Party in the USA and UKIP in the UK. When the bottom seems to fall out of the middle-class economy, these kind of embarrassingly conservative organizations seem to emerge. We can only imagine the political fallout if these trends continue."

They may not break through this time.  I suspect UKIP will unravel in a series of embarrassing revelations.  But there will be others, even less civilised.

And they will be the direct result of the proletarianisation of the middle classes by the new elite.  And of people not being able to afford to live in the area they grew up in.  Or promising to re-balance the economy, but selling off dysfunctional RBS exactly as it was before.  Or prioritising the protection of bankers' bonuses in Brussels negotiations.  And so on, and so on.
Posted by David Boyle at 10:09

Nothing like a quarter of the population voted UKIP. Turnout was around 30%, so around 7.5% of the electorate voted for them. (In 1983 the GE turnout was 72.7, so many more people voted for the Alliance). What you say about the pressure on the middle class is true, but low political engagement is far more of a threat to our civil fabric than UKIP.