Could we learn about the future shape of the UK from King Caractacus? 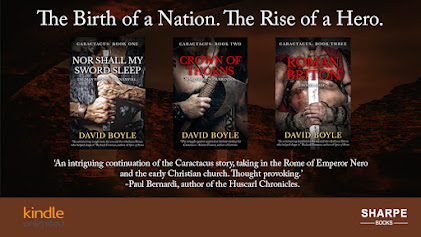 About ten years ago, I was talking to someone from The-Pub-Is-The-Hub – Prince Charles’ outfit for advising community pubs. They told me how the best economic unit for a community pub to survive economically wasn’t 10,000 people in the catchment area or even 2,000. It was 500.

That was a revelation to me, and the beginning of a fascinating search for other examples when smaller units survive better economically than bigger ones.

Maybe some hint of that was also why Private Eye editor Ian Hislop has been presenting a BBC radio series about the lost kingdoms of England, like Anglia, Mercia and Wessex and so on.

I have been wondering myself about the significance of such ancient history. After all, why has the BBC commissioned Hislop now?

Perhaps because there is a deep sense that our units are now too big to be effective – and because the idea of small nations across Europe, introduced in our own age by Freddie Heineken, is beginning to work away at our imaginations.

That is in fact one of the reasons why I wrote my series of novels about Caractacus (the third part, Roman Briton, is now out) – though these are earlier nations: Celtic ones and rather smaller than those Saxon behemoths.

In fact, there were three reasons why I began researching Caractacus – partly because I read about his lost autobiography which might have explained how he held back the Roman invaders for nine years (this was a misunderstanding on my part: it was probably never written).

It was partly because the idea appealed to me of Caractacus being a Christian king facing down the pagan Romans (who just happened to have arrived a little after Joseph of Arimathea came to our shores between 3-5 years earlier).

But partly also because I wanted to re-imagine Britain as a group of semi-independent nations under a high king.

Because we only have Roman sources, we normally think of the Iceni, Brigantes or the Silures as barbaric tribes.

They may have been that of course, but they may also have been something a good deal more civilised – nations like Icenia (under King Prasutagus and Queen Boudicca, covering Norfolk and Suffolk), or Brigantia (under Queen Cartimandua, covering Yorkshire), or Siluria (under King Arviragus and covering south Wales and Somerset. And held together by loyalty – or lack of it – to a high king.

Rehearsing a list like this is even more of a reminder how much classical scholars cloud our view of our own history. These are all Romanised names – we know that Caractacus was originally Caradoc, but recovering the rest demands an informed but imaginative approach to linguistics.

The days of high kings may now be gone, but Brexit does at least give us an opportunity to think about the structure of our nation, the right scale to be most effective and where our natural boundaries actually lie.

Maybe, if we can sort out the old logical issues about UK devolution – which used to be called the West Lothian question – then the idea that, in the almost legendary history of our home, we used to live in small semi-independent nations. So we could again: not just Scotland or England but maybe home rule for London or Sussex or Dumnonia.

Either way, it can be fun thinking about a far more localised structure for Britain that might actually be a futuristic vision of nations that might provide a template for other parts of the world.

I must admit, your article tells a beautiful story, but I think we have to accept that in fact it is simply a story - a fond fantasy which appeals to those of us because we can pretend that there was some historic time where things were just nice: the sun shone and the dappled shadows of the oak and ash provided a beautiful aura for a walk along the lane; the local postman delivered letters every day at nine; Men went to the pub on Saturday to talk about how the local cricket team beat Nether Upbury; Women drinking afternoon tea and discussing the big issues of the day - "Mrs Miggins hen laying a double yolker. Well I never!" - the local fat bobby always said hello and had a kindly word in the ear of the village scamp who had been scrumping apples from the local squire's orchard once again and at the cottage hospital the local doctor cared for the aged as the approached the end of their lives on this blissful earth, while he cured everyone else of their minor ailments and sprained ankles.

Indeed, no one had heard of a Chinese takeaway until one day a Chinese ZTZ99 tank rolled into their village and took away their liberties.

Indeed David, it can be fun thinking about a far more localised structure for Britain, but it could never, ever be a futuristic vision of nations that might provide a template for other parts of the world. Dreaming is good for the soul, but pretending this could ever be reality is just futile.

sorry to miss your comment until now, David. i clearly need to write more about this if im ever going to convince you!

But dont you think there is a distinction between romantic stories - where you are undoubtedly right - and the possibility of other structures for the UK and elsewhere, which would have different problems i'm sure, but that is the point, isn't it? The difference...