The cynical miserablism of the left, and why it can't win yet 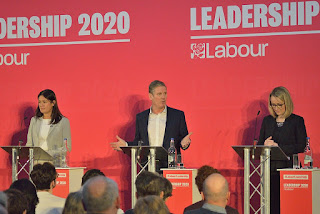 This post was first published on the Radix UK blog

My brother-in-law appears to be becoming some kind of bellwether of British electoral politics – he has voted at least four ways to my certain knowledge in recent years, since retiring as a headteacher. And – to my great surprise – this time he voted enthusiastically for Johnson.

Why? Because, as far as I can see, it would be one in the eye for the media for complaining endlessly about who paid for the famous Boris curtains.

This is of course one of many explanations flying around the press about why the Conservative government should have performed so well, after plunging us into covid, lockdowns, test and trace and so on.

I have three thoughts on this.

First, there remains a real question mark over the usefulness of the Labour Party in its current form, given that is remains constructed as a tool to support the industrial classes, when there are so few of them around. It still smacks of those mighty acronyms of my youth – TGWU and CEGB. We are all generating energy these days, just as we are al mix-and-matching our TV habits. The days when we all watched the same TV programmes have long gone (until 1980 perhaps, with the launch of the fourth TV channel).

Second, I have been wondering whether my brother-in-law is right that – at least by implication – the opposition politicians have found themselves entangled in the minds of voters with a preachy, intrusive and alien media. They feel, perhaps, that – when they get bored of Boris – they will kick him out themselves. When they are good and ready.

Finally, I believe G. K. Chesterton was onto something a century ago, when he talked about the “tone of bitterness [and] atmosphere of hopelessness” encouraged among socialists, explaining why he became a Liberal instead. That is even truer now than it was then.

It is hard to see how we a can arrange a government of the left that is able to put aside the judgemental, puritanical, knowing and pessimistic. The left parties that win, if they ever emerge to do so, will be positive about people and communities. The cynicism and miserablism of the left is deeply offputting, whatever their detailed policies might be.

And unfortunately, when the Lib Dems run out of their own ideas – as they appear to be doing – they get suffused and infected by the same disease. Since the first Liberal embraced the first Fabian idea – circa 1890 – they have developed the same kind of snobbery, not far below the surface.

Because that is what it is. Nor is the way out of this, as those around Starmer seem to think, about wrapping ourselves in the union jack. We have to believe in ourselves as Irish, Scots, Welsh and – yes – definitely English people too. And in our neighbours – not glancing nervously at them as possible racists or the descendants of racists – and remembering Gladstone’s definition of Liberalism, as “trust in the people, tempered by prudence” (as opposed to Toryism “distrust of the people, tempered by fear”).

And knowing that, if we can do that, we cam be great nation, and a moral one too.

This isn’t the pseudo greatness that comes from carrying a big stick – those days have gone too. It is soft power from the ubiquity of English language and culture.

We may anyway have to update the union flag too, assuming that our current government appears to be on the verge of losing Scotland.

I have always felt, rather as George Monbiot did last week, that the Lib Dems in Scotland have found themselves on the wrong side of this debate – until Nick Clegg declared the party were ‘unionists’ that was never what the Liberal Party was. Nor were they nationalists, of course. They were in favour in Ireland of home rule under a united umbrella.

If Johnson persists in his Napoleonic attitudes to Scotland, the comparison with Ireland in the 1920s will become increasingly worrying – on the verge of bitter civil war that would echo into our own day.

How do we stop this? There is only one way. Finally to sort those ridiculous constitutional compromises that have caused us so much difficulty – launching a proper parliament for England in Oxford or Manchester.

The settlement would allow, the four nations of the UK, to go their separate ways but to hold them together under the Council of the Isles, or similar, with the queen and the common currency, the foreign office and a defence umbrella. Still run out of a cut down Westminster (London might also be a sovereign nation too).

Perhaps in the fullness of time, we might even get the Irish republic to join as an associate. Scotland would be free to join the EU if it wanted to, and we would need to find a democratic and borderless way to govern the old UK.

To others on the left who suggest that England would then be doomed to have a Tory majority forever, I would direct them towards Matthew Parris in the Times last week (£), who suggests that there is a limit to how long we will all accept one-party rule.

I think he is right. If we can somehow generate an optimistic alternative.