What is losing 350 trains a day worth in compensation? 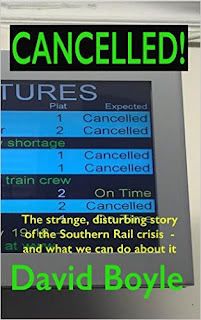 I had wondered whether the situation with Southern Railways had improved a little. It seemed unlikely that we could lose a Prime Minister, most of the shadow cabinet, the England football manager, Boris Johnson - and still face chaos on the train lines to the coast. But that was clearly naive of me. I went to London three times last week and had three trains cancelled under me.

Perhaps the element that I find particularly frustrating about the situation is the way that government ministers are defending operators Govia Thameslink Railway - the rail minister Claire Perry even went out of her way to praise their managers as "top of the range". And the way so many MPs who should know better are still blaming the situation on some kind of industrial dispute.

The truth is there is really no evidence at all that the rise in sickness has anything to do with the rail unions - and quite a lot of evidence that it has everything to do with rising stress levels among the staff.

I was overwhelmed with information and personal testimony after my first blog posts on this (read by over 100,000 people so far) and I researched and wrote a book about the situation called Cancelled!, now available on Kindle, as a paperback and as an ePub file or a pdf.

As you can read in the book, I've come to believe - having gathered as much information as I possibly could from as wide a range of sources as possible - that the company has little idea themselves why the franchise is grinding to a halt. It just seems easier to blame the unions for something neither they nor ministers can understand.

They seem to be in the grip of the traditional official fallacy - namely, if we don't understand why something is happening, it must somehow be someone's deliberate plot.

In fact, as you can see in more detail in the book, the situation is a direct result of the centralised management techniques used by GTR - and used by many of the companies which have won public service contracts.

This is therefore the beginning of what may prove a widespread phenomenon. We shall see.

In the meantime, I wrote the following last night. I published it on the Real Press blog, and it has already been overtaken by events.

The thing is that I simply couldn't imagine that GTR was being so irresponsible that they were not planning the inevitable cancellations in some kind of regular pattern. A recently leaked document showed that they were negotiating with the Department or Transport to cancel 192 trains every day.

The company had told me that the negotiations came to nothing. But there must be some planning going on - otherwise it would be wholly irresponsible.

But then, if they were planning which trains to cancel, why were they not keeping passengers informed? Why were they still waiting until five minutes before departure when everyone is on board?

This morning it was clear which side of this fork that they had decided to jump. They have announced they will be releasing an emergency timetable with 350 fewer trains a day.

In the next few days, we have to assume that they know which trains they are cancelling, but prefer not to say. After the timetable, we need to shift attention on what they owe us as a result.

I gather they have been offering a one-off £50 payment to season ticket holders, and they seem to believe that will be enough. That's the same as one peak-time return from Shoreham by Sea to London.

The truth is, it is something of a slap in the face. I am assuming that the sufficiency of it will now be tested in the courts.

See my book Cancelled! on the Southern Railways disaster, now on sale for £1.99 (10p goes to Railway Benefit Fund).
Subscribe to this blog on email; send me a message with the word blogsubscribe to dcboyle@gmail.com. When you want to stop, you can email me the word unsubscribe
Posted by David Boyle at 08:49

As a conductor we've been told the downgrading of our role is now December, when asked why Southern replied that Network Rail hasn't approved DOO over many coastal routs as well as the Aron Valley. They jumped the gun, no end in sight.

Beware fellow commuters, the so called emergency timetable is nothing more than a rouse! this will be the timetable going forward.
It is no coincidence that most of the cut services are those where conductors are needed.
So I ask you, who is prepared to die to prove this joint venture between the DFT and GTR is unsafe?
Because this is what we are talking about.
If they get their way, please, please be very careful when boarding trains in the future, and if anything goes wrong once the train is between stations, as the driver could well be injured, the best thing to do it stay on the train and phone the emergency services and give them as good a location as you can. Only if the coach is on fire should you consider leaving the train, if you do use the emergency exit mechanism look out the windows and only use it on the side where there are no other tracks! Please be safe. Worried of Horsham.

It sounds a lot like a repeat performance of Enron, using train service as rolling blackouts.