Halnaker Mill and the state of England 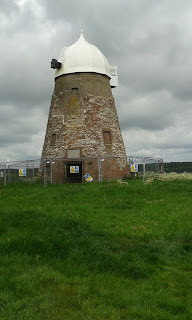 Last week, over half term, I made my annual pilgrimage to Halnaker Mill in honour of Hilaire Belloc who, for all his peculiarities - admiration of Franco etc etc - has been a huge influence on my political thinking.

And my Distributism, of course - the Liberal heresy which has rendered me so incoherent to my fellow members of the Lib Dem policy committee over a decade or so, until I was finally heaved off in 2012.

The key difference between Distributism and Liberalism, it seems to me, is purely mood.  Liberalism is overwhelmingly optimistic; Distributism is melancholic.  It is like Tigger compared to Eeyore - but they both, to extend the metaphor, live in the Hundred Acre Wood.

Which brings me to Halnaker Mill, which was the inspiration for Belloc's most famous Eeyore poem, and also one of his most melancholic.  He uses the ruin of the old mill as a metaphor for the state of England, with the land lying idle and so many people going hungry.

Ha’nacker Hill is in Desolation:
Ruin a-top and a field unploughed.
And Spirits that call on a fallen nation
Spirits that loved her calling aloud:
Spirits abroad in a windy cloud.

Spirits that call and no one answers;
Ha’nacker’s down and England’s done.
Wind and Thistle for pipe and dancers
And never a ploughman under the Sun.
Never a ploughman. Never a one.

Halnaker Hill has always been a beautiful spot, with views over the Solent.  The Mill itself was rescued and restored in the 1930s and again since.  So I thought of Belloc when I found that the sweeps have been removed again by West Sussex County Council, and the old mill cordoned off (see picture).

It awaits a further health and safety assessment, I gather.  But never a ploughman. Never a one.