Why this is Middle-Class-Week, and what it means 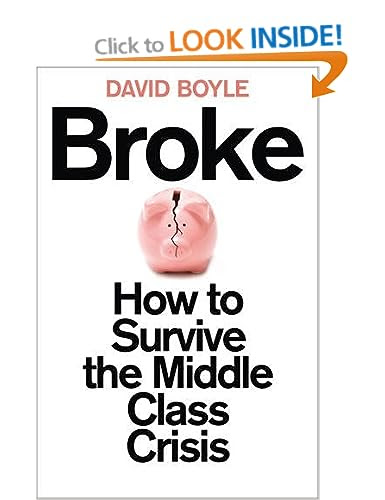 I have written rather too many books over the years, and they invariably miss the zeitgeist - often by centuries.  So I was flabbergasted this morning to realise that I had, at least on first inspection, hit the zeitgeist bang on.

Not only has Ed Miliband hit the headlines today with an article in the Daily Telegraph this morning about the plight of the middle classes, but Nick Clegg is due to talk later in the week about the way in which - for the first time since the Second World War - middle class parents expect their children to struggle more than they did.

Not only that - but my updated and 'affordable' edition of my book Broke - now subtitled How to Survive the Middle Class Crisis - is published on Thursday.  How about that for a conjunction...

In practice, I find that hitting the zeitgeist bang on is just as stressful as missing it my decades.  You feel you have to rise to the challenge.

I hope to do that in the next few days, and I will certainly have a go at rising to the challenge on this blog.  But there are two reasons why I believe this particular conjunction of events is important.

First, Ed Miliband is brave enough to say that the trends causing the crisis began before the coalition took office.  This allows us to talk about the squeezed middle in some kind of context.  This is, after all, a crisis that has been three decades in the making.

Second, since we are not talking just about the immediate cost of living increases, there is the opportunity to look at exactly why we are hurtling towards a new class division - between a tiny elite and a vast, dependent proletariat.

That provides the opportunity to discuss potential solutions which are bigger than the occasional Fabian-style tweaks in the tax and benefits regime.

I have a feeling that this is a significant moment, the very beginning of major political and economic change.  Watch this space...
Posted by David Boyle at 21:29