Why zoos used to be so funny 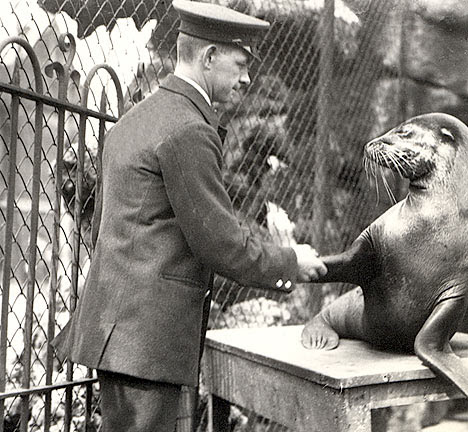 The news that an American court is being asked to decide if chimpanzees have the equivalent of human rights seems to me to be an important milestone.

The interview on the Today programme yesterday singled out elephants, whales and dolphins, as deserving similar treatment.  They are self-aware, deeply intelligent and sentient.  Of course they should be given 'personhood' under the law.

In fact, by the end of the interview - which had clearly been arranged for tongue-in-cheek treatment by John Humphreys - I was completely convinced.

I've no idea what the court will decide, but it does seem to be another nail in the coffin for zoos.

I have a theory about this.  About two decades ago, I was working on a brilliant schools TV history series called Time Capsule (made by the equally brilliant Colin Still) and found myself ploughing through copy after copy of Victorian editions of Punch, in search of illustrations for the rostrum camera.

There were a large number of cartoons about zoos and it slowly dawned on me that they nearly all had something important in common.  The zoo visitors were nearly always portrayed as roaring with laughter.

These days, zoos are rather po-faced, serious, politically correct places.  The Victorian purpose of zoos - an afternoon of comedy - did survive into my lifetime in the form of the chimpanzees' tea party, but not for long.  I believe that was why people used to visit them.  The animals were funny.

Of course this is all very regrettable.  Yes, there is a parallel with the previous century's recourse to Bedlam for a good laugh.  But equally, I'm not sure that - when we laugh at and with our pets the whole time - the disappearance of laughter from zoos is altogether healthy.

Perhaps I'm just insensitive.  But I'm not sure that the current very SERIOUS zoos are going to survive, at least in their current form - and it is pretty vital, if chimpanzees are going to get any kind of rights, that people are exposed to the existence of other species apart from their own.
Posted by David Boyle at 09:29