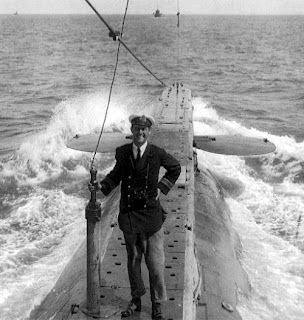 In fact, John Mills cut his film-acting teeth in a 1935 naval film called Brown on Resolution, where the captain was played by Henry Stoker, who had actually commanded the Australian submarine AE2 when she slipped through the Dardanelles in 1915.  Perhaps he learned the style from Stoker himself.

All of which is a way of asking: why are there no submarine films about the First World War?  Why don't we celebrate those pioneering exploits, on both sides, where there were still no bunks (except for the officers) and often no lavatories, and no hearing equipment when you were submerged?

I have therefore written a celebration, at least of E14 - which provided a VC for both its commanding officers, and the wreck of which was discovered in the Dardanelles only last year.  It is now published as an ebook called Unheard, Unseen, which allowed me to tell the strange story of the first submariners, the huge strain, the alcoholism, the constipation and the damp and dirt.

The main hardship was not so much lack of sleep as lack of fresh water. It could have been E14 which provided one true story in 1916, when the commanding officer showed a lady around his submarine in Malta, and was asked how they could wash their shirts if they had so little water. The captain, whoever it was, explained that they turned the shirt inside out at the end of the week.

What about the next week, the lady asked? “Oh, by that time,” he said, “the old inside is sufficiently aired to resume duty."

The behind the scenes First World War story is largely untold, and the first book to concentrate on E14 (commanding officer: Lt Cdr Courtney Boyle) and I found it fascinating to research (thank you, RN Submarine Museum).

My reason for mentioning it here is that it will be available today and tomorrow as a free Kindle download from Amazon (though you can also download it onto PCs).  Go ahead, make my day (as they say).  Here is the link:  http://www.amazon.co.uk/Unheard-Unseen-Submarine-Dardanelles-ebook/dp/B00DY6Q39E/ref=sr_1_1?ie=UTF8&qid=1376945582&sr=8-1&keywords=unheard+unseen
Posted by David Boyle at 09:28

The Spy in Black ?