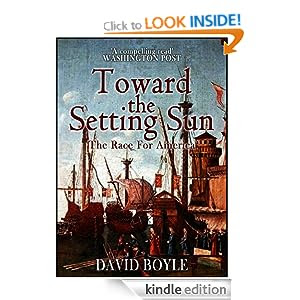 What was it about the 1490s that meant that, simultaneously, Europe got to grips with the shape of the globe?

That one generation - from the Bristol expeditions to the American coast from 1480 to the circumnavigation of the globe by Magellan's crew in 1522 - took the world maps from a handful of vague blobs with Jerusalem in the centre to an understanding of the whole globe.

What is extraordinary is that those people who made the breakthroughs, notably Columbus, Cabot and Vespucci, all knew each other.  Once you abandon the rival nationalist myths about 'discovery', and weave the story together as it originally was - including Perkin Warbeck and the Borgias - it is as much about the European renaissance as anything else.  That and the development of Intellectual Property.

That is certainly what emerged in my book Toward the Setting Sun (now an ebook at £2.99) and that is what I said yesterday in the Huffington Post.

It makes it possible to imagine a bit more clearly just what humanity could achieve in ten years if they really set their mind to it.
Posted by David Boyle at 18:34