Why M&S can't claw their way back 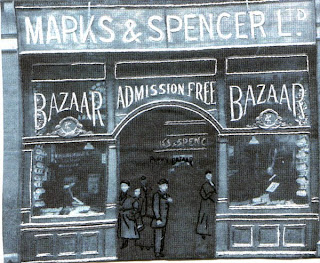 Between 1880 and 1910, a third of all the Jewish people on the world were moving continents, squeezed  into dirty, lice-infested, black-funnelled steamships, arriving in London Docks or Ellis Island in New York Harbour, hoping for a new world, often owning nothing more than they were wearing.

One of them was Michael Marks, who seems to have decided on England because his older brother Barnet had gone there first. But as Michael arrived in London in 1882, with enough money for the train to Stockton-on-Tees, he found that his brother had gone – or was going – to the Yukon to join in the gold rush. Barnet also went into retailing and opened a successful shop in Dawson City. Something about the Marks family seems to have put retailing in their genes.

So there was Michael, without language, money or prospects, but with something else. There was clearly something about the family that drove them to sell, and here he had arrived in the right place at the right time.


There was a retailing revolution under way, to serve the growing middle classes in their new urban terraced homes, like Mrs and Mrs Pooter in Upper Holloway, with a little yard at the back and maybe a housekeeper and maid. There was a wealth of cheap manufactured goods now on the market, filtering through to the upwardly mobile working classes, whose incomes were steadily improving throughout the 1880s.

It was 1884 before he acted, the year of the siege of Khartoum, of Huckleberry Finn and the Fabian Society. He decided to move to Leeds, a burgeoning Yorkshire city, with a population of 300,000 clustered round the railway line to London. He particularly chose the district of the Leylands, with its strong Jewish population steeped in the clothing trade. Here he was going to stake his claim to the new world, and here – lo and behold – he encountered the help he needed.

The local wholesaler Isaac Dewhirst was wandering along Kirkgate one morning when he was approached by a man who said just ‘barons’. Realising this apparition spoke no English, he turned to his manager who spoke Yiddish and discovered the he was looking for Barran Clothiers, which was known to give work to refugees.

It was a lucky coincidence. Dewhirst was fascinated by Marks and offered him to lend him £5. Marks asked instead if he could take the money in the form of goods and pay off the cost in instalments. Dewhirst agreed, and Marks became an itinerant salesman in the Yorkshire Dales, selling buttons, wool, tablecloths, sacks and socks. It is a measure of the slightly unworldly company that Marks was about to found that the firm of I. J. Dewhirst and its successors are still supplying them to this day.

Marks was a damn good pedlar, but it was an exhausting business.  Market halls were to the working classes what department stores were to the middle classes. They were all-weather affairs. You could buy nearly everything under one roof, and they were cheap.

But Marks had a language problem. He solved it by laying out all his goods on the table, rather than keeping the bulk of them under it, so that people could handle what they were about to buy, rather than ask questions about it. He also began what became the credo of his company.

He avoided long haggling conversations with the customers, by classifying everything according to price. Above the section for penny goods, he coined what became one of the most successful advertising slogans ever invented: ‘Don’t ask the price, it’s a penny’.  A strategy being adopted even now by the poundshops.

I describe all this in the light of the latest figures which shows M&S's clothes offering still sinking.  You can find out more of the bizarre history of the company in my book Eminent Corporations.

The big question is, where did they go wrong?  The answer, it seems to me, is they kept on listening to the siren voices of those telling them to appeal to everyone, and especially the trend-setting young.  Hence the terrible mix of children's clothes you find there now, covered in logos and desperately trying to be trendy - while John Lewis has usurped their place as clothing providers to the middle classes.

That and their terrible fall from grace in the 1990s, betraying the UK textiles industry - and all the links with trusting suppliers that had made the company so innovative - not to mention the vacuous pursuit of share price at the same time, the last resort of those without strategy.

It is a sad story and I wonder whether they can recover their position.  My feeling is that John Lewis is a mutual, and is therefore bound to be more successful.  In the end, the mutual going head to head with a hierarchy is bound to win - and M&S was always the most hierarchical company.

This is an important experiment to make.  Because being dependent on the financial markets now looks like the kiss of death for UK companies - the precise opposite of what we have been told for the past generation.
Posted by David Boyle at 09:50