Why I'm not wearing a poppy this year 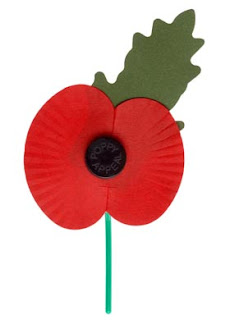 The extraordinary furore about whether or not wearing a poppy is political, brought to us thanks to Fifa, sort of obscures the main issue for me about poppy-wearing in general - that it has become, this year at least, a rather more intolerant and raucous example of groupthink than usual.

It never was raucous before. Poppy-wearing was a rather restrained, English way of expressing collective grief (and more complex aspects of Englishness: see my book How to be English).

It is part of my heritage. My grandmother lost a father, three uncles and a brother in two world wars. In some ways, the first death - my great grandfather, leading the Black Watch into action at the Battle of the Aisne - still casts its shadow over us today.

But I have felt uncomfortable in recent years that everyone in the public eye, every newsreader, every politician, has to go through the motions by wearing a poppy.

This feeling of discomfort has increased this year by a slight edge of aggression about the whole thing. Sarah tells me a group of youths rushed through her train last week, shouting: "Where are your poppies?".

Because when yobs start chanting their insistence on the outward signs of national consciousness, it scares me a little. As if wearing a poppy was a necessary proof of patriotism in Theresa May's Britain.

The point about Remembrance Day appears to have been lost. It isn't supposed to be about the show. It is about giving to charities that support people wounded in war. It is about remembering the dead and the wartime generation, and making sure it doesn't happen again.  I'm doing all of them this year - but I'm also emphasising my Englishness by not actually wearing my receipt for having done so. I will not be ticked off on their checklist by the Brexit police.

Nobody could be more patriotic than me. I'm happy to wave union jacks on royal occasions and will continue to do so, until it becomes compulsory. But I'm not going to be bullied into wearing a poppy. Let them slip me a white feather if they dare.

This whole business seems to go with a coarsening of public discourse on both sides of the Atlantic, as it seems at least possible that Donald Trump may be president-elect by midweek.

But don't let's make assumptions about particular political positions. I'm far from sure about the current position of the Lib Dems on Brexit. I voted Remain, but I am coming slowly round to backing a hard Brexit. My reason for doing so will only be accelerated if Trump gets anywhere near the White House.

It's that, as so often over the past generation, my fellow Liberals are clinging to a worn out economic past.

In a world where the reasons for growing intolerance are obvious - the flaws in an economic system designed to create billionaires, when everyone knows that their wealth barely trickles down - the sooner we dispense of the trappings of the old economics, the safer we will be.

Of course, I may be wrong about how this should be done. But I'm inclined, as soon as possible, to wave goodbye to the Single Market. Goodbye to TTIP or RBS. The sooner we can construct a UK economy here based on small-scale businesses with a level playing field, where everyone can share in the prosperity they create, the more chance we have of escaping the looming darkness.

Most of all, let's stop pretending that the old world was working, before we get Trumps popping up everywhere, seeming to tell the truth.

My reasons for this feeling of unease about Europe are in my book (with Joe Zammit-Lucia), The Death of Liberalism? This seems to me to be a moment where Liberals need to take a stand - not to defend our struggling, hollow institutions - but to build new ones, and make sure they are genuinely Liberal.

We also need to be able to see beyond the outward signifiers, like poppies, and to reject them when they get tyrannical.

I admit to feeling uncertain about all of this, but uncertainty seems to be a pretty healthy reaction right now when, as Yeats put it, "the worst are full of passionate intensity".


See my book Cancelled! on the Southern Railways disaster, now on sale for £1.99 (10p goes to Railway Benefit Fund).
Subscribe to this blog on email; send me a message with the word blogsubscribe to dcboyle@gmail.com. When you want to stop, you can email me the word unsubscribe
Posted by David Boyle at 10:09

You might want to go further than not wearing a poppy and reconsider giving money to the British Legion at all. This article from Veterans for Peace is pretty comprehensive in laying out why: http://www.ekklesia.co.uk/sites/ekklesia.co.uk/files/my_name_is_legion-web.pdf

I feel much the same. It seems to me that though the poppy may not have been a political symbol in the past, the creeping obsession with conformity, which leads to panels of TV football pundits wearing poppies from mid-October onwards, has caused it to become one. FIFA wouldn't have been right 40 years ago - they probably are now.

regarding the implications of Brexit, I run and own a small manufacturing business and what I am now doing is setting up a new company in Germany which will, if successful, be where I sell and manufacture for the EU and the world. My UK factory will remain because my main customer is in the UK, but I have no illusions about exporting from the UK - why would I want as a small business to navigate tariffs and trade barriers?
So my vision for Brexit Britain is a green and pleasant land rather emptier and poorer than before.