Do we really want the BBC to be completely unbiased? 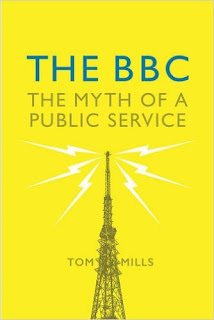 There is no doubt that, just at the moment, voters tend to want change. Perhaps that is too obvious even to mention, except that it happens to coincide with a period when the Left doesn't seem to want change at all.

Where they do want it, it is either symbolic - pulling down offensive statues of Cecil Rhodes, for example - or it is just going back to the policy assumptions of a generation ago (rail nationalisation, the return of the CEGB).

It is a reversal of the way the world ought to be. But when the most conservative political force around is the Left, it might perhaps provide some explanation for recent electoral peculiarities (if you could call the Trumpbrexit that).

This is really a way of saying that I have been reading an excellent critique of the history of the BBC. And what a relief it is to read someone radical who is not embracing existing institutions, trying to keep them exactly as they are now.

The book is called The BBC: The Myth of a Public Service. The author Tom Mills would I'm sure be the first to recognise that parts of the BBC manage to operate in a challenging and innovative way, but argues that - despite the debate about independence - the BBC is largely under the control of the establishment and it reflects their rather dull and unchallenged opinions. And he's right.

"Power became more centralised, professional decision making became more marketised and working conditions were made more precarious. Meanwhile, as most found their freedom curtailed by neoliberal bureaucracy, a largely Oxbridge-educated elite retained its decision-making powers and the salaries of those at the top sky-rocketed..."

The problem with the BBC isn't that it is biased. Or that it doesn't make strenuous efforts to avoid being so. It is that, so often, it is unable to lead debate or challenge entrenched opinion or look forwards. Because that would require an independence of mind that it simply doesn't have.

It is peculiar that the BBC has kept its huge reputation for truth largely because of the brilliant and deeply controversial success of the BBC European Service in the Second World War, when that part of the BBC was actually under the direct control of the Foreign Office (see my book V for Victory to read this peculiar story of individuals making a difference).

It is a paradox.  None of this should suggest that we should abolish the organisation and hand us over the Fox News - my only two queries for Tom Mills are that he uses the term 'neoliberal' far too much, and that he doesn't go very far towards setting out an alternative to the way the BBC is currently structured.

Otherwise, it's an important and readable book. Churchill used to say that you can't be unbiased between the fireman and the fire. He said it during the General Strike in 1926  But there is a distinction between the truth - which is absolutely vital - and a commitment not to take sides over anything, which is basically amoral mush. It may be one of the reasons government in the UK has been so staggeringly stuck.

So why don't we debate these things? Because, as usual, the Left prefers to keep tight hold of nurse/for fear of finding something worse.