When you find yourself in a dark tunnel, don't go backwards - hurry towards the light ahead. 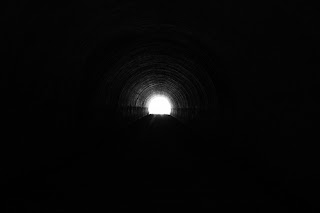 Listening to the radio a few days ago, I heard an American interviewee said that he could not believe Trump was president, I was suddenly cast back three and a half decades to an evening in November 1980.

It was Rowan Atkinson, Mel Smith and colleagues in Not the Nine O'Clock News and they were pretending to be country-and-western singers, singing about a range of unlikely things they believed, and ending:

"I believe the devil is ready to repent...
But I can't believe Ronald Reagan is president."

Yet in both cases, the election was a sign that the world had changed. We could have sat around clinging to the old world in 1980, that it would only have hindered the development of a better way forward.

To understand a little of what is happening, I have started reading Nick Clegg's new book Politics, which is a good deal more honest, thoughtful and insightful than some of the rather mealy-mouthed reviews suggested. The only thing I really disagree with is the sub-title ('Between the extremes'), I believe extreme change is now urgent - I just don't want the conventional extremities represented by May, Farage and Corbyn.

But there was one insight early in the book which seems to me to cast light on what happened in the USA, one of those peculiar revolutions that appear to stem from people demanding less power.

Clegg says that he interprets the strange, dreamlike period during the 2010 general election which saw his popularity soar - known to journalists as 'Cleggmania' - as the first symptom pf the populist revolution which has sprung the nation from the European Union and swept Trump to power, and seems only in its early stages.

If this is correct - and I think it is - then a number of implications follow.

First, the populist uprising has nothing to do with identity politics (Hispanics swung to Trump compared to 2012) and everything to do with the frustration with a political elite that seems dedicated to making very little happen.

That sounds like an insult, but it is based on what seems to me to be an important point. The last four decades have been dominated by an economic ideology which suggests that governments should do nothing but wait for a rather narrow and authoritarian interpretation of the market to rule instead.

I should explain that I believe in a free market, not what we have at the moment, a rigged market for the very wealthy, which has made a few people staggeringly rich, but has squeezed the rest of us - and dangerously so. There seems to be a catastrophic loss of belief in our existing, exhausted institutions, which preside over the apparent powerlessness of the political elite.

Second, it implies what will happen to Trump and those like him when their inevitable compromises or economic incompetence becomes apparent. They will go the same way as Cleggmania, and very quickly. Or, in Trump's case, end up printing money to avoid it.

Third, that moment of disillusion is very dangerous. It means effective solutions need to be ready, thought-through and capable of speedy action. As Keynes said to Mosley, not to help the populists but to "save the country from them".

Fourth, those politicians which avoid this duty, and which cling to the failed institutions - claiming that people have been deluded and were conned into voting the way they did - will quickly become irrelevant. For that reason and others, the current Lib Dem position on a second referendum is patronising and disastrously wrong-headed. I hardly know anyone outside the Westminster bubble who wants to vote again.

Quite the reverse. When you find yourself inexplicably in a dark tunnel, you head as fast as you can to the glimmer of light ahead. You don't faff around looking for how you got in, and demanding some kind of appeal..

Because the advent of Trump, not to mention the new gang in charge in the UK, implies a far more urgent duty. The old world is over. We need to work out what an effective new economic dispensation will look like. How do we genuinely spread prosperity to everyone, not just the Trumps?

A political solution awaits an intellectual solution. Not how many yellow balloons we can blow up. Not how we can redesign our party logo. And the longer we delay it, the more perilous our civilisation becomes.

There is only safe way out, and it is forwards - and away from the technocrats. Don't let's keep pretending there is a way back to technocracy...


See my book Cancelled! on the Southern Railways disaster, now on sale for £1.99 (10p goes to Railway Benefit Fund).
Subscribe to this blog on email; send me a message with the word blogsubscribe to dcboyle@gmail.com. When you want to stop, you can email me the word unsubscribe
Posted by David Boyle at 09:37