The first divorce because of the rail scandal? 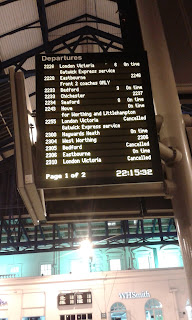 It is almost exactly six months since I had a conversation with a member of Southern Rail's staff on a station near where I live, and it set me off blogging about the mystery of what exactly was going on with the local trains.

My surprise when more than usual numbers of people read the blog soon turned to horror and then fear when those numbers mounted, and suddenly nearly 100,000 people had read it. My original blog was based on the original conversation, which wasn't entirely accurate. It took me a month's work to find out what was actually happening, and since then the numbers of readers have spiralled again.

You can read what I discovered in my short book on the bizarre Southern scandal, Cancelled!.

What I seemed to have stumbled on was a scandal that the conventional media preferred not to cover. The Euro referendum was going on at the time and, anyway, most journalists are no longer at ease covering industrial disputes - it feels too much like covering divorces.

Thanks partly to the courageous and innovative efforts of the women behind the Association of British Commuters, which has formed itself into a formidable campaign group around the epicentre of the muddle (Brighton), the world is now watching. Or at least the politicians and the media are.

But all that seemed irrelevant to me last week when I heard about the first divorce I've come across because of the failures of the train franchise. The couple have a baby and the husband is so late so often that the marriage could no longer take the strain.

Public services can do that kind of thing to people only in certain narrow circumstances - as Mid Staffs did to its elderly patients. It happens when government prefers not to look at facts to the contrary and managers and commissioners are not looking either - because they are focused exclusively on achieving some objective specified by the minister or the Prime Minister.

This kind of devastation only happens when those involved get caught up in a doublethink worthy of George Orwell. They become like the Bourbon princes, of whom it was said that they forget nothing and they remember nothing. That's the Department of Transport.

They represent the triumph of hope over experience. When you do the same thing over and over again, it is unlikely to have a different effect.

That seems to be the message also of the chief executive of Brighton and Hove Albion, furious that Southern cancelled trains home from a recent match, which meant that some fans had to sleep the night in the station.

Now we hear that the Department of Transport has decided to protect Southern's operators by assessing them on all three contracts that make up the GTR operation, so that Southern's failings are to some extent masked.

Bizarre that a government should collude like this, or that a Secretary of State (King Log) should regard this as doing his duty to service users. Apparently he doesn't seem to have one.

Because the truth is pretty clear. The government will not put GTR out of its misery, and support the Southern rail users, while they are in dispute with the rail unions (and now the drivers are coming out, which will put off any kind of resolution even longer).

They are aware of course that the reason for the complete dogs dinner they have made of their industrial relations is that the Department has given them no room for manoeuvre,

Roll on the court case, And I thought the ABC's letter to rail minister Paul Maynard today hit the nail on the head, Bang on.

And if you happen to be an MP reading this, please ask the government when they will be making the report and advice from their expert Chris Gibb public, so that those most affected by Southern can also have the benefit of his advice too?