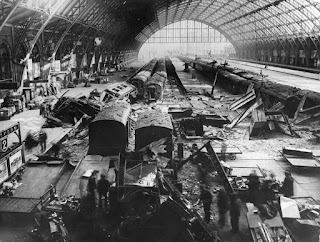 Most of this blog first appeared last night on the New Weather blog...

It is a peculiar aspect of the Southern Rail fiasco that so many of their staff and managers, at least the ones I come across, are not just extraordinarily patient – they are also very nice people.

I can’t say I have actually met the chief executive, Charles Horton – though I have seen him in the distance at an ill-tempered ‘meet the public event’. Nor did I ever really make friends with their former chief operations officer Dyan Crowther, now gone on to calmer waters, who was not fond of me, I understand.

But I ended an infuriating three-hour journey from London to Shoreham on Tuesday night watching two local managers facing down the enraged commuters with calm and courage. One young woman, shaking with rage, even threatened one of them with “blood on the rails”.

You can see why they are enraged of course. They have to pay through the nose for their season tickets to be messed around night after night. But what really twists the knife is the failure of senior managers and ministers to come clean about what is very obviously going on.

Govia Thameslink is obsessed with their battle with the unions, as if it was union action that has caused the staff shortages – or the job losses among platform staff, or which have removed people from stations.

They might have done better obsessing about the failures of Network Rail to invest properly in their track, the lack of which was the reason services to coast ground to a halt yet again on Tuesday evening.

So let us tell the truth here, very clearly. The problems on Southern Rail are caused primarily by three factors:

1. Their failure to recruit enough staff to run the railways, forcing them to rely in overtime, which can never be forthcoming in the numbers they need.

2. The ridiculous contract with the Department of Transport which gives no incentives for GTR to improve the service (they get just 3 per cent of ticket sales) – and encourages them to cut costs to the bone instead.

3. The bizarre way in which the decisions are taken – not by GTR managers but by Department officials and Go Ahead accountants. Neither of which (sorry, Jeremy Corbyn) are very good at running railways.

You can find out more of this strange story in my short book Cancelled!

I know that. The managers and staff know that. So why does the transport minister Chris Grayling, King Log himself, continue to pretend that this is all somehow explained by industrial action – which doesn’t help but is not the cause.

Because he feels as hemmed in by the Treasury, and his own cabinet colleagues – for whom he has to perform and to stand firm against union ‘militants’ in the required way – and accepting the real reason why the rail services unravelled would simply open him up to ridicule.

At all costs, the Department seems desperate to prevent that narrative seeping out. The strikes came in that respect in the nick of time.

So here’s the question. What do service users do when a service is appalling, is undermining lives, and nobody in authority will come clean and accept it? When the contracts remain secret, and the actions taken to hold contractors to it are secret too? What do we do – short of overthrowing the government, and there’s no guarantee that would change the regime at the Department of Transport even if we did?

What can we do if the privatised services which were suppose to bring fresh air and flexibility to our public services have actually remade them in the most Soviet, inflexible style?

But there is an interim answer. I see that the Association of British Commuters, launched within the last few months by two energetic and creative women from Sussex, have not just raised enough money from the rest of us to retain a legal team – they have now outlined the case against the government.

If this works, and it may well work, then crowdfunded legal actions against the departments that are protecting indefensibly bad services, may be the way forward.

All Whitehall needs to do to avoid the real rage is to be honest and to say what can and can’t be done – and not to convince themselves about packs of old nonsense like the so-called ‘sicknote strike’.

Let me say something more about the enraging failure to tell the truth. I get copies of the emails sent to King Log and his colleagues by the chief executive of a firm in the City. This one I got a fortnight ago:

“Dear Mr Horton - your latest PR campaign "Let's Strike Back" is a disgrace and confirms what we all know about your lack of leadership skills... I am a confirmed free market capitalist, who owns a business in the City; I hate unions. Mr Grayling THIS IS NOTHING TO DO WITH THE UNIONS!!! Please take control of this hopeless company.”

This was Southern’s previous reply:

This one I got while I was stuck at Haywards Heath on Tuesday night:

“Please just sort this fucking mess out, for the love of God !! Really not sure how much more, me or anyone else can take of this. We are the 5th biggest economy in the world and I am standing at Victoria fighting with other passengers like we're in a 3rd world country. Mr Grayling, just fucking make it work,”

If it wasn't so enraging, it would be amusing. But this is what happens when you feel you are not just being messed about, that you are being patronised and lied to, by people who have convinced themselves of something which is clearly not true.


So tell me, Mr Grayling. If it is union action which is causing the problems, how come the service is more reliable during the strikes? (Today so far: 29% more than 10 mins late or cancelled).

See my book Cancelled! on the Southern Railways disaster, now on sale for £1.99 (10p goes to Railway Benefit Fund).
Subscribe to this blog on email; send me a message with the word blogsubscribe to dcboyle@gmail.com. When you want to stop, you can email me the word unsubscribe
Posted by David Boyle at 20:58

The law is our last hope, even the Government in article 50 has to abide by the Law. The ASLEF union (in wanting to prevent the loss of conductors) has had to cancel two strike ballots when successfully challenged by GTR in court. But it should work both ways, the DfT have so far ignored the Association of British Commuters crowd funded judicial review in wanting to see the key documents between the DfT and GTR over franchise commitments (breaking the unions at all cost?) Also GTR are ignoring the Disability Act in making passengers who need assistance book in advance to ensure there is a member of staff on board the train to provide assistance where previously the service has been provided with a guaranteed conductor.

Time is running out for the conductor, in January most will be On Board Supervisors, ticket collectors without a fixed role or a need to actually work on trains, no job security. Their only action is pointless strike action, pointless because GTR are not affected and hence don't care about strikes and cancelled trains and the DFT must act as if this has nothing to do with them. This is all about maximizing profits in the coming years, not about customer service which will be reduced and definitely not about safety on the platform at dispatch time or throughout the journey.

In defending the indefensible (the Christmas Strikes) with the poor Southern service as it is at least you'll know where you stand. Christmas Eve services would normally finish at about 10pm and New Year's Eve trains are usually empty. Remember this is prime time for engineering works so the service before strikes would be majorly disrupted anyway.