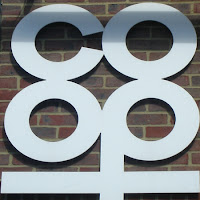 There is a new, or at least renewed, Co-op store in my town.  It is the only supermarket here and it isn't exactly cheap.  On the other hand, it is pretty convenient, and I find myself popping in and out in the most unsystematic way.

I bank with the Co-op (not actually a co-op, because there is no legal format for a co-op bank in this country, but owned by a co-op).  I carry a Co-op credit card. I'm steeped in the place.

But I must admit, I have a qualm every time I go through the door of my local store.  I remind myself that a slither of everything I buy there will go, against my will, to the Labour Party.  Last year, the Co-op group agreed to fund the Co-operative Party - a wholly owned subsidiary of Labour - to the tune of £625,000 over 18 months (£34m since 1992).

This is enough for me to choose a different shop whenever I have the opportunity. I don't like it and don't want it, and it irritates me that I have no say in it.

I thought of that when I read the government's proposals for trade union reform today.  Let's leave aside the other reforms - some are important but it is important that we have an active, responsible and healthy trade union movement in the UK.

But what about the question of opting into the political funds, especially when they go to the Labour Party, rather than opting out?

The Co-op doesn't give me either option as one of their customers. But funding a political party ought to be a conscious decision, and the current set up has only been allowed because neither Labour nor Conservative parties were prepared to work with the Lib Dems to clean up political funding and put it on a proper democratic basis.

I would go further. This kind of involuntary or at least lazy funding of the Labour Party has, in this respect, allowed the current situation to continue.

Worse, it has continued in existence a political force that is so linked to the era of big trade unions, mass membership, and industrial unrest, that the nation's political culture is still stuck there.

It seems to me - every time I go into the Co-op, in fact - that the Labour Party is a great useless lump, full of sound and fury when it is out of office, but a timid lamb too frightened to shift power when it is in office, because it is out of its time.

Perhaps, I say very tentatively, if we turned off the involuntary tap, it would not survive and would leave space for a political party of our own time, which might make the changes we need.  In the meantime, and over recent decades, the Labour Party has been kept alive artificially.

Turn off the life support mechanism, I say. But then, I'm a Lib Dem, and you might say that it's my party that is now on life support. We'll have to see, I suppose.

Setting aside the transparent cynicism of the Government's proposals to hog tie the Labour party and also the Trade Unions in terms of strike action, I wonder whether there may be unlooked for consequences for them in this. I suspect that it will be certain that when (if) a Labour government is returned, there will be a revenge attack on the corruption of Tory funding; rightly so. However, less certain, but nevertheless something to be hoped for, is that Labour and the Unions get their respective semi-detached houses in order and become efficient in securing firm votes for political funding and for industrial action. The paradox for the Government is that should this happen industrial action may become harder to defeat and life will be more difficult for employers as the consequence.

The problem is that the Lib Dem solution seems to be state funding of political parties — which has exactly the same problem writ large, in that at least (as someone who rarely shops at the Co-op and isn't a member of a union) none of my money goes to a party I don't support, but if there was state funding then as a taxpayer I would be being forced to fund parties I disagree with.